John Wick: Chapter 2 ended somewhere wonderful by weaponising the secret, subdermal societies that otherwise strain to give the films any sense of a terrifying, vampiric centre. It was a smart decision - taking the series' weakest, chummiest element then transforming it into a rolling, enormous threat. Wick trespassed against the rule-set, killing an enemy currently under the protection of the sacred hotel chain that offers its clients boutique ceasefire. Thanks to this action screenwriter Derek Kolstad was able to pivot, taking Wick out of the comfort provided by being a murderer among murderers. There's a bounty on his head. He's prey now.

John Wick: Chapter 3 - Parabellum begins shortly afterwards, plunging the title character into an Invasion of the Body Snatchers sized nightmare in which every single person in New York is living a pantomime life, concealing incredible martial arts skills and an intent to collect on Wick's head. For one act Parabellum keeps us locked into this paranoia - we see the bounty ticking up, our favourite assassin burning through former allies (including The Matrix Reloaded's Randall Duk Kim) and pointedly battling against foes he enjoys an otherwise friendly rapport with. Wick is attacked and injured, losing all access to the city's network of underground death bazaars. Gunless, he is forced to break into a museum armoury to assemble a six-shooter from antique parts like Tuco in The Good, The Bad and the Ugly.

Parabellum's problem is that it isn't interested in working through this idea of an assailed Wick. The character's fracturing sense of self is suggested then played at arm's length, the film preferring instead to lean back into the circuitous, disinteresting machinations that prop up this counterfeit world. Wick seeks audiences with higher and higher authorities, begging forgiveness along the way. These acts, which at least seem to be taking John somewhere compromised, are instead ways to massage through the dramatic dead-end of two opposing powers that cannot, yet, taste defeat. Still, the finale's the best yet - the aperitif before the tower climbing, Game of Death style, main course sets Wick against special forces soldiers clad head-to-toe in the same bulletproof material used by the assassin's tailor. Sustained gunfire does nothing but wobble the incoming hordes. Wick must instead get in close and use his pistol like a dirk - jamming its muzzle into the armour's creases to score the kill shot.
Posted by Chris Ready at 16:59:00 0 comments

It's all a matter of taste but I bounce off a lot of the detailing in the John Wick universe. The baroque rule-set baked into the stories often seems unduly synthetic; a series of hanging excuses designed to stop or re-start the action whenever the screenwriters (in this instance, Derek Kolstad) can find no other, meaningful way to push our hero forward. Likewise, the technological leaps in tactical tailoring - that keep Wick buttoned up and protected without ruining his silhouette - suggest a heroic immunity that, really, stands to undermine any sense of situational distress. Nevertheless this particular flight of fancy does give rise to one fantastic moment - Reeves tugging at his slim-fitted jacket, forcing his lapel up over his face to protect his head from incoming bullets.

What is unmistakably and consistently brilliant about John Wick: Chapter 2 though is its star, Keanu Reeves. The 53 year old actor's movements stand in tonal opposition to the flamboyant nonsense around him. His Wick gait is stiff and deliberate, arthritic even. A living testament to a career filled with colliding bodies. The film's interpersonal action - just as frequent as the close-quarters shoot-outs - sees Wick using his size and weight against his enemies. His signature move is to trap his assailant's arms or pistol in some way, then kick away at their legs until both of their bodies collapse in a heap. Wick is then able to use them as an axis to take aim at other, incoming goons. Another choice that stands out is the actor's speed or, rather, his lack of it. There's no great hurry in Chad Stahelski's film. We see Reeve's body contorting and crashing in ways that let us know that it is pained, that these manoeuvres require an effort beyond simply shifting mass. A small but perfect note that lends every single confrontation a faint sense of fallibility. John Wick will win. But it will hurt.
Posted by Chris Ready at 21:09:00 0 comments

Star Wars: The Rise of Skywalker - TELL ME ABOUT IT STUD

JJ Abrams can pile on as much C3PO-with-murder-eyes, stroke Evil-Rey-is-Kylo-Ren's-saucy-Dagobah-tree-fantasy misdirection as he likes, the one thing you cannot take away from the Star Wars series is the sheer, awe-inspiring scale of John Williams' music. A couple of creeping notes and you're instantly transported to this place of space opera adulation that you might not even otherwise possess. That's the power in Williams' brooding, heroic score - it's authored - connecting you with an instant sense of fondness that no temp track snippet could ever inspire.
Posted by Chris Ready at 20:44:00 0 comments 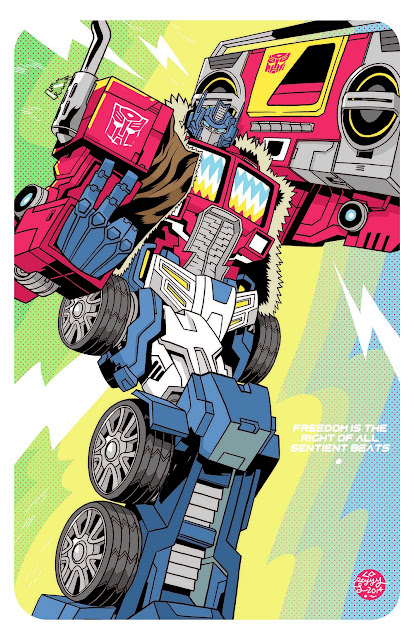 A slow start on Call of Duty: Modern Warfare's new Gunfight mode but I get there in the end. The decision to preview Infinity Ward's big money reboot with this small, stop-start, cage match style mode is unusual. Rather than prowl around looking for backs to ventilate, players are immediately confronted with short but intense bouts where victory hinges on their ability to read their opponents then react accordingly. In this way it is somewhat similar to Call of Duty: Black Ops 4's Blackout mode - death as a real, meaningful loss condition rather than just a minor setback on your path to scoring sky-filling killstreaks.
Posted by Chris Ready at 11:04:00 0 comments

Fancied some modern warfare so I reinstalled Battlefield 4. Despite the last-gen geometry, DICE's game still presents as pretty nifty thanks to the blaring, exaggerated lighting effects and the all-encompassing clacks and cracks of frustrated conflict. Unfortunately official servers are a thing of the distant past, leaving server trawlers at the mercy of cranky admin looking to orchestrate fish-in-the-barrel spawns for their greedy pals.
Posted by Chris Ready at 21:53:00 0 comments

Jackfrags with a snappy gameplay clip for Infinity Ward's upcoming Call of Duty: Modern Warfare. Mr Frags' approach to games-casting is a little different in that he takes some time to focus on options browsing and mechanical interaction. For instance, if this video is indicative of final gameplay balance, then at least some gun recoil is superficial - animation traits and ostentation designed to evoke a sense of reality rather than offer a true representation of the path you can expect your in-game bullets to follow.
Posted by Chris Ready at 23:42:00 0 comments

Since Paprium is never (ever) coming out, I'm pinning all my belt-action hopes on Streets of Rage 4. This fourth entry introduces yet another member of the Hunter family, Cherry - the daughter of one-and-done hero Adam and niece of follow-up thumper Skate (or Sammy if you're Japanese). Cherry battles street scum with jumping fierces and a malfunctioning electric guitar.
Posted by Chris Ready at 21:00:00 0 comments

Blasphemous - BE PURE! BE VIGILANT! BEHAVE!

Since Blasphemous kind of reminds me of deliberately dreary, licensed platformer Chakan: The Forever Man - a punishing Mega Drive game that has you bopping biomechanoids with a puritanical ghoul -  I decided to look up Team 17 to see if they were producing anything similar during their 16-bit days. Turns out as well as pumping out Alien Breed sequels, the British devs were also involved in a long-running feud with Amiga Power over lower-than-expected review scores that culminated in the team filing an unsuccessful lawsuit against the magazine. Thankfully, for anyone looking to turn a critical eye over 17's latest game, Blasphemous is looking pretty fucking nifty.
Posted by Chris Ready at 20:33:00 0 comments 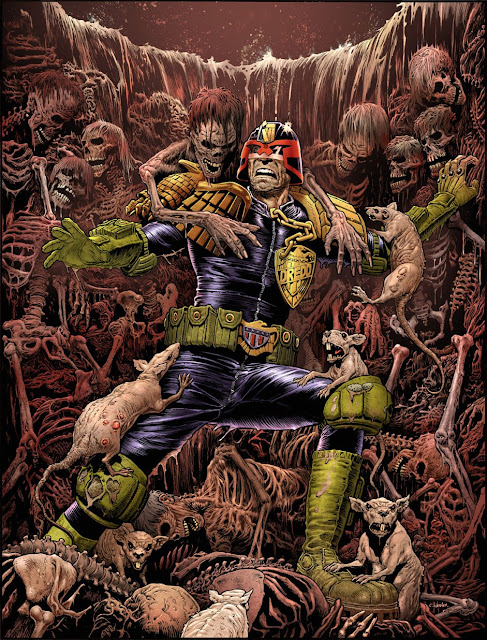 Digital Foundry talk us through the new resolution and anti-aliasing tech powering Infinity Ward's latest, Call of Duty: Modern Warfare. Just in case that all sounds incredibly dry, stick around for an extended look at the multiplayer night-vision stage designed to place you in a Sicario set-piece, Azhir Cave. According to reports from the various press events, this optoelectronic level proposes a variety of limits on how players approach the level. Gun-sighting is restricted; hit-markers and point reports are gone, while paths through the area track towards confined. As with last year's Call of Duty: Black Ops 4's Blackout mode, creeping and the correct assessment of audio information will be your bread and butter.
Posted by Chris Ready at 08:36:00 0 comments

To The Death #6 by Geoff Senior 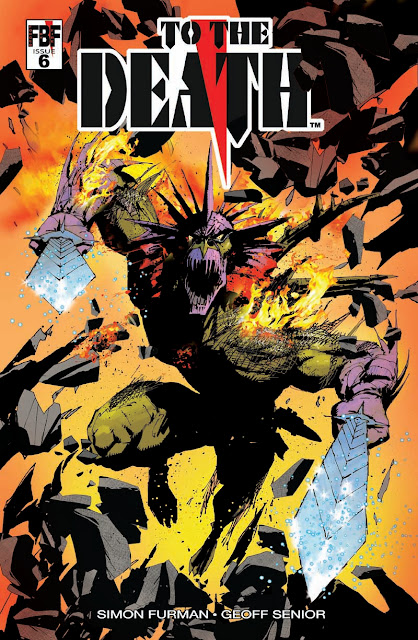 Email ThisBlogThis!Share to TwitterShare to FacebookShare to Pinterest
Labels: comics, Geoff Senior, To The Death