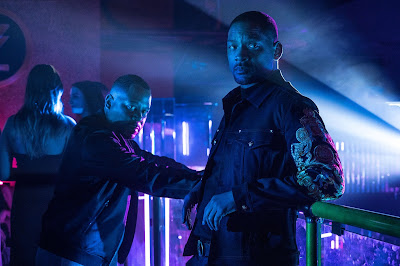 An unexpected companion piece to last year's Gemini Man, Adil El Arbi and Bilall Fallah's Bad Boys for Life once again considers Will Smith, and the star persona he has created, in terms of obsolescence and replication. Where Ang Lee's film favoured mechanical reproduction, for Life offers a supernaturally slanted duplicate, a piece of youthful vigour stolen then reconfigured to exact a personal revenge. Smith returns as Mike Lowrey, a sociopathic rich kid turned cop, originally positioned as the cool guy opposite to Marcus Burnett, Martin Lawrence's sweaty, aggravated police detective. The original Bad Boys centred around an identity mix-up with each of the top-billed stars pretending to live the life of the other. Smith got to play the dutiful family man while Lawrence delivered his own snarling take on a moneyed, two-fisted Lothario.

Bad Boys for Life surprises because it remembers these tossed-off building blocks - particularly the ease with which Lowrey took to slipping on a new identity - using them to power events that now stretch backwards and forwards in time. Unlike both Michael Bay entries, films that never felt any particularly need to stay on one firm emotional wavelength, this third Bad Boys actually aims to define several human relationships then extract non-hysterical drama from the ways in which they evolve or clash. This development requires a level of earnest introspection that, while not completely new to the series, is usually smuggled in then drowned out by hideous violence or skits centred on gay panic. Arbi and Fallah's film elides Bay's radioactive mania (and, frankly, the knuckle-dragging director's world class flair for action and visual invention), arriving at a tone that is closer to the chummier end of the Lethal Weapon sequels.
Posted by Chris Ready at 23:25:00