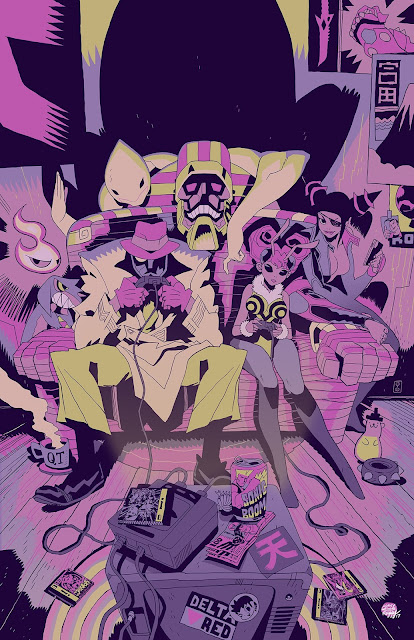 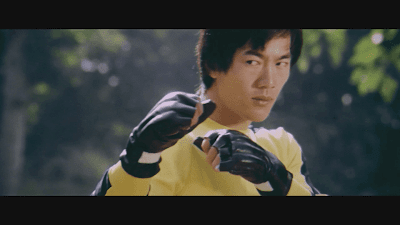 Despite an obvious setback, Bruce Lee's death didn't stop Hong Kong's more devious movie producers from attempting to make new Bruce Lee films. Dozens of counterfeit projects sprang up in the wake of the star's passing, many positioning themselves as sequels or continuations of the actor's brief but transformative career. Dynamo takes a novel approach to this bootlegging, Shan Hua's film forgoes picking at the departed actor's scraps to focus instead on the real life rush to find a credible replacement. Dynamo then is a Bruceploitation film specifically about the unsentimental business practices that drove that particular sub-genre - it acknowledges the cynicism, channelling it into an overarching state of anxiety.

Bruce Li plays Lee Ting Yi, a taxi driver who impresses Mary Hon's charming but unscrupulous talent agent with his martial arts skills and muscular good looks. Lee's hackman is exactly what she's looking for - a fresh face for the fame machine. Despite Dynamo's hard-nosed framing, the film keeps Li and Hon's characters apart, essentially in separate pieces. One concerning a likeable backstabber, making a name for herself in the PR trade; the other a mixed-up martial arts film in which a cabby trains with his very own drunken master (an entertaining Ku Feng) before being relentlessly attacked by mobsters in picturesque environments. That Dynamo survives only as a choppy English dub (that may or may not be missing scenes) only exacerbates this sense of disconnection. Li's energetic fight scenes - choreographed by Yuen Woo-ping - are exciting but the threats he faces are dramatically ill-defined and, despite a last-minute kidnapped girlfriend, even strangely impersonal.
Posted by Chris Ready at 21:25:00 0 comments

Email ThisBlogThis!Share to TwitterShare to FacebookShare to Pinterest
Labels: Ennio Morricone, music, The Good The Bad and The Ugly

The Digital Foundry gang take a look at Capcom's iconic brawler Final Fight, detailing the tech behind the original coin-op as well as the many ports and sequels that followed. Of particular note is the news that, for their Mega CD conversion, Sega slowed down each of the playable characters, clipping the overall movement and attack speed of the nimble selections. A similar sort of averaging out plagued the Mega Drive version of Golden Axe - specifically the hit box of the playable character's weapons. Tyris Flare's short sword and Gilius Thunderhead's massive broadaxe both hit with the same medium range assigned to Ax Battler's middle-of-the-road sword.
Posted by Chris Ready at 17:37:00 0 comments

Michael Mann's Blackhat is about professionalism and the application of group expertise. Less ambitious action films only have room for one figure of intellectual authority, usually an infallible, young, white male who gets to hurry the whole piece forward. Supporting casts are exactly that, subordinated, typically portrayed as a gaggle of empty suits, only called on to gasp as the lead character makes their latest logical leap. Thanks to Chris Hemsworth's Hathaway, Blackhat does have its own gigantic blue eye, fortunately though Mann is more excited about collaboration - how apparently disparate outlooks and disciplines can, when correctly managed, feed back into a more dynamic, free-flowing whole.

It's this energy that carries the characters, and the film itself. Know-how is deployed as an adrenal rush that collides with, then powers through, the enemy's machinery. Each member of the unit drafted to investigate a trade exchange hack that leaves America embarrassed and China massively out of pocket has a distinct role to play. Viola Davis' FBI Special Agent and Holt McCallany's US Marshal, both prime targets for sneering contempt in a lesser piece, prove themselves indispensable to the investigation. In Mann and screenwriter Morgan Davis Foehl's film every person is in the room for a reason. The team members contribute, each bringing a specialist, singular, knowledge - not to mention slang - to the table.

Viewed in Mann's preferred cut (distribution limited to New York film retrospectives and torrents derived from American pay television), Blackhat often feels like a companion piece to the director's feature debut Thief. Both films are about experts able to surmount catastrophic situations with rapid problem solving. The rush of this incremental success blasting Hathaway and James Caan's Frank towards their conclusions. There are key difference though. Whereas Frank was prepared to isolate himself then physically tear down his life, Hathaway is actually willing to open himself up and collaborate. Rather than push her aside, Hathaway draws Tang Wei's cyber attack partner and love interest Chen Lien closer as their enemies draw near. This remodelling makes for a more visceral, romantic conclusion - perhaps indicative of the director's senior perspective. Mann's juiced-up, metaphysical hero has finally found a counterpart he can trust his life to.
Posted by Chris Ready at 21:47:00 0 comments

The Transformers #1 (UK) by Rui Onishi 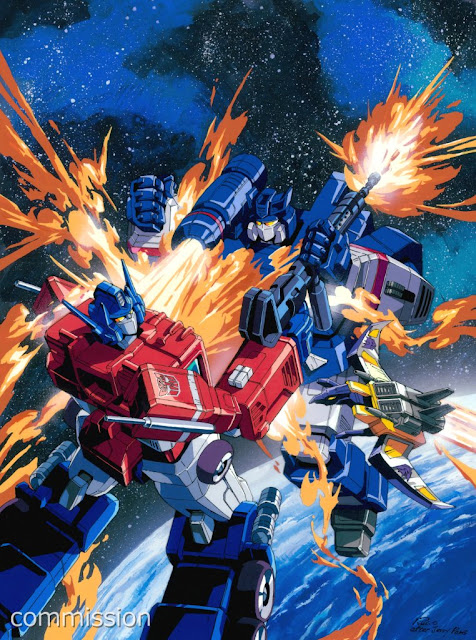 Jump, dash and blast as a flickering, luminescent, piece of living code in Recompile from Dear Villagers and Phigames. Described by its developers as a Metroidvania game in which the player has as big an effect on the unfolding narrative as they do the unlocking game world, Recompile is set for release on PC and both Sony and Microsoft's next-gen systems.
Posted by Chris Ready at 20:48:00 0 comments

The Treasure of the Sierra Madre 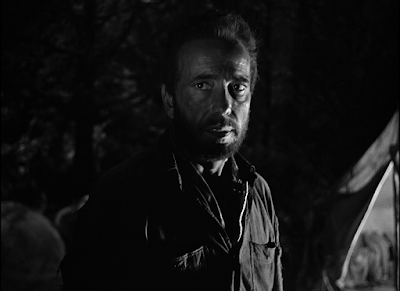 Settled into their flea-bitten cots in a Mexican dosshouse, a gang of down-on-their-luck Americans sit rapt while an aged prospector pontificates on the subject of gold. Although Humphrey Bogart's Fred C Dobbs is evidently only half listening, his antenna is up, scanning for a quick route to solvency. The warnings are lost on him. The older man, played by Walter Huston, talks about the metal's intoxicating effects, how it can ruin an honest man, transforming him into a greedy, insatiable savage. Dobbs isn't an honest man though, certainly not with himself. He is, to some degree, a fantasist. Dobbs wears public and private faces; writer-director John Huston canny enough to begin our time with him before he has any need to maintain a consistent fiction.

We meet Dobbs rambling around the streets of Tampico, an oil-town whose wealth he is unable to access. He accosts American tourists, jabbing at them with a clipped sob story, hoping to needle some change. Despite this destitution, Dobbs still considers himself a cut above the Mexican kids who comb the town, shaking down bar patrons for increasingly meagre lottery tickets. Dobbs is aggressive, both in tone and action, when confronted by one such child - he howls at the eager little hawker, even going as far as hurling a glass of water into the youngster's face. This cruelty is diffused by the boy's reaction - it barely upsets his sales pitch - but we've noted something crucial. Dobbs is mean, disproportionately so, when he feels cornered.

The Treasure of the Sierra Madre then does not tell an Old Testament tale of immaculate materialism, Huston's film instead concerns magnification. How an excavated fortune can stir up profound paranoia in a man already capable of a slippery, delusional sort of self-justification. Dobbs' partners, the old prospector Howard and Tim Holt's Bob Curtin are comparatively easygoing; gentle souls who just want to put the work in then retire. Dobbs is out to settle a score. His stated dream is to breeze into a well-to-do restaurant, order up everything on the menu then harass the wait staff, even if the food is beautiful. Dobbs is hemmed in, his personal space incessantly intruded upon. He suffers mine collapses and umpteen unwanted visitors, all prodding away at him and his property. Huston and cinematographer Ted D McCord's academy ratio frame squeezes the film's horizontal space, crowding its subjects together until they can't help but collide.
Posted by Chris Ready at 18:16:00 0 comments

Email ThisBlogThis!Share to TwitterShare to FacebookShare to Pinterest
Labels: Films, Humphrey Bogart, John Huston, The Treasure of the Sierra Madre 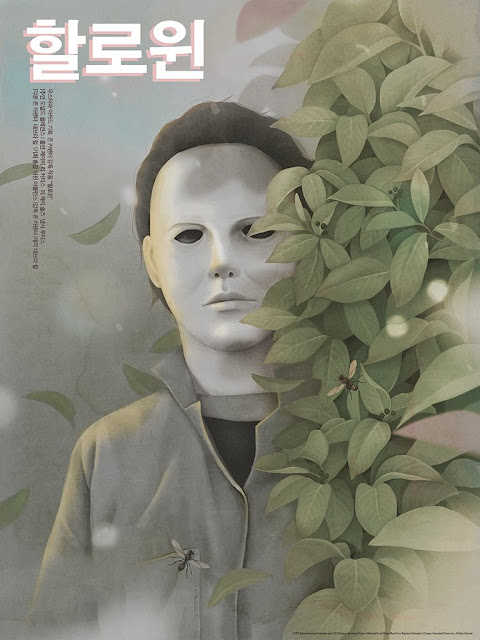 Digital Foundry take a look at Bluepoint's forthcoming Demon's Souls remake. The vid touches on the (underwhelming) trailer and the gorgeous 4K stills Sony have since released, as well as speculating, based on the studio's PS4 remake of Shadow of the Colossus, what sort of tech options we can expect for this PS5 release.
Posted by Chris Ready at 20:34:00 0 comments 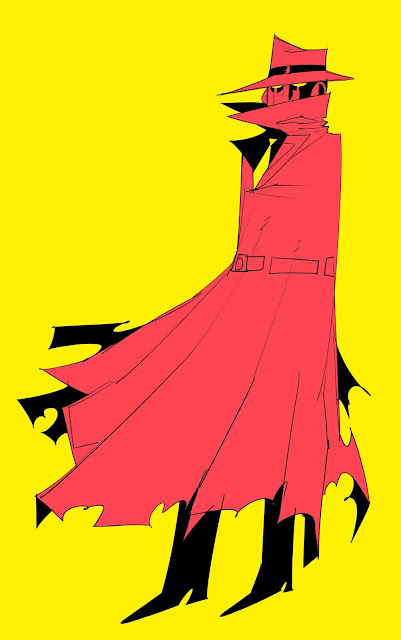 A former hero reintroduced as a home invading murderer? Someone at Capcom has clearly been spinning up their Universal Soldier: Day of Reckoning BD. Due 2021, Resident Evil Village looks to mix the creeping first-person dread of Resident Evil 7: Biohazard with the miserable, tetanus opulence seen in Resident Evil 4. Can't wait.
Posted by Chris Ready at 12:13:00 0 comments

Despite the baffling title and a failure to tap into Spider-Man: Into the Spider-Verse's beautiful pop art sensibilities, it's nice to see a remaster that goes beyond simply upping a last-gen resolution. Spider-Man: Miles Morales plonks Brian Michael Bendis and Sara Pichelli's teen hero into Insomniac's Spider-Man, expanding and remixing the 2018 game to take advantage of (amongst other things) the PS5's zippy SSD load times.
Posted by Chris Ready at 11:16:00 0 comments

Last night's PS5 show contained a surprising amount of platform games - indeed at times it seemed like we'd slipped through a wormhole, travelling back to the days of full-on mascot shovelware. The most inventive looking of the selection is, as it turns out, also the system's pack-in title (another throwback), Astro's Playroom. A sequel to last-gen's Astro Bot Rescue Mission, SIE Japan Studio's latest has been designed around showcasing the DualSense controller's brand new feedback features.
Posted by Chris Ready at 11:04:00 0 comments

Definitely one of the stars of the PS5 show, at least in terms of graphical fidelity, Horizon Forbidden West promises yet another sunken future for players to snoop around. I never got around to playing the first Horizon Zero Dawn but this sequel, with its mix of massive, pollution-spewing Zoids enemies and a story that seems to be taking cues from Princess Mononoke, certainly appeals.
Posted by Chris Ready at 10:41:00 0 comments

Neostream Interactive's vapourware Kickstarter game Little Devil Inside springs back to life as a timed PS5 exclusive. Challenging news, I'm sure, for people who backed a Wii U release five years ago. Still, Neostream's game does look delightful, mixing The Legend of Zelda perils with an art style that hovers half-way between a dungeon cooking manga and a Franco-Belgian action-adventure comic.
Posted by Chris Ready at 10:28:00 0 comments

Beautifully described as 'nekopunk' in the stream comments last night (wish I'd caught the person's name), Stray casts players as a nosy feline, slinking around a futuristic city where robots have finally overthrown, and apparently exterminated, their cruel, fleshy masters.
Posted by Chris Ready at 10:04:00 0 comments