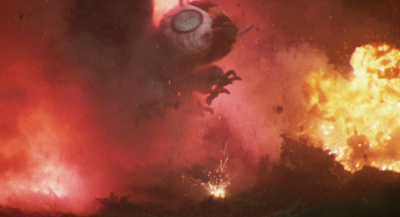 Unlike the prowling, combative Godzilla, Mothra's relationship with mankind skews benign. Rather than the apocalyptic, finger-wagging alternative she is explicitly a guardian, correcting mankind's mistakes, healing us and the Earth we share. In that sense the character is perfect material for a children's film, a graceful lepidopteran happy to muck in and offer security in times of great need. Rebirth of Mothra keys into this maternal aspect, positioning Mothra as an ancient, expectant mother, guarding her slowly gestating offspring. Her fairy pals, the Shobijin twins who sing dreamy power-up songs for their fluttering masters, are here revealed to be triplets. The third sister, Aki Hano's Belvera, is a Gothed-up trouble-maker angling to unseal prehistoric dragons from their magical prisons.

Our charmless human guides through this adventure are the Gotos, a bickering, alienated upper-middle class family who have made their fortune in logging. Naturally this environmental encroachment is partly to blame for the resurrection of Rebirth's feature villain, the four-legged dragon Death Ghidorah. Like his namesake, King Ghidorah, this three-headed honker revels in pointless, agitated cataclysm. Although there's never much of a sense that Death's tantrums are threatening any urban areas, special effects director Koichi Kawakita has a ball rigging overcranked, tightly framed images of churning, earthy destruction. Director Okihiro Yoneda and editor Nobuo Ogawa compliment this orgiastic thrashing by killing off the majority of diegetic sound then amping up Toshiyuki Watanabe's music, lending the film's many moth on dragon confrontations a spaced-out, magical quality.
Posted by Chris Ready at 09:16:00