With the Star Wars Blu-Rays finally on their way, can we expect yet more legacy tinkering from George Lucas and his army of ILM Yes Men? Badass Digest reckons we can. The above clip purports to include a leaked sound file from the new HD masters (married to vid footage from the existing DVD release); specifically some audio additions to the throne room throwdown from Return of the Jedi. I'm sure strongly worded boycott petitions are being drafted as we SPEAK.

Making full use of the upload to YouTube option, here's my first online ranked match on Street Fighter III: 3rd Strike Online Edition. I'm the grey gi Ryu with the yellow bandanna. Don't expect much, still gotta shake out the cobwebs. Far too much jump-in, and slow pokes. That said, I'm having a time with this game. Sat up close with the music blaring stereo, it's like I'm back playing my Dreamcast in 2001, avoiding going to uni.

Everything gets a trailer! Enjoy this flash animation pass at some panels from Frank Miller's upcoming al-Qaida stomper Holy Terror, scheduled to drop on the 10th anniversary of the September 11th attacks. How's that for maximum nasty? 20XX hopes are sky high - Miller's contextualised the piece as wish-fulfillment propaganda, a contemporary spin on the super (racist) anti-Axis Batman serials from the mid 194os. Given that Miller currently enjoys a rep for being a grubby, right-wing smut peddler, there's an expectation that Holy Terror won't operate above the level of one-note slugger. I hope that isn't the case. The Dark Knight Strikes Again showed the man has a real gift for sharp satirical swipes and political caricature. More of that please.

Despite ranking the original Devil May Cry as the best game of 2001, I've barely posted anything about Ninja Theory's upcoming series rejig DmC Devil May Cry. Why? Frankly, it's all just too depressing. Nothing shown so far has contradicted that first announce impression of a half-think title rushing around undoing all its predecessors good work. Ninja Theory's main contribution to the franchise so far has been the decision to scowl up doofy Dante to appease autistic 15 year old boys, and cut the frame rate in half. Gee, thanks!

This combat clip presumes to allay fan fears, but all I'm seeing is an angry young avatar slowly chugging through some default weapon swirl combos. Where's the mental? I'm seeing mid-string weapon changes, but it's all focused around various forms of dull dull blade. Where's the bat-spewing vampire guitar? Where's the briefcase that unfolds into an attack helicopter sized combat platform? And if not them, then where's something like them? Where's the whooping, the cheering? Where the fuck is Dante?

Franchise overlap! Call of Duty: Black Ops' DLC prods wind down with total zombie installment Rezurrection. Due late August on 360, vanilla issue owners will finally get a chance to take a run at the remastered rotter maps from Call of Duty: World at War, as well as all-new zero-g stage Moon. Spendthrifts who forked out for one of the gee-whizz editions, and already own said stages, can expect the trip to Earth's satellite as a freebie. Colour me STUNNED.

Hobo with a Shotgun by James Stayte 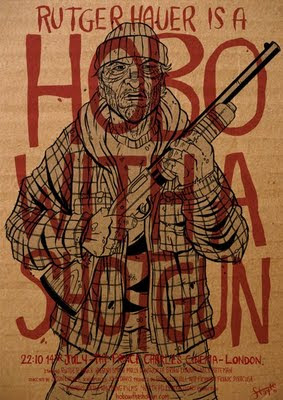 Many of England's cities are burning, but forget all that! We've got a new peek at the latest Call of Duty, Modern Warfare 3! Right-wingers! Keep your eyes peeled early on for scenes of the player gunning down mobs on London streets! Such unexpectedly tasteless scenes form up this montage shill for the Modern Warfare threequel's latest mode addition, Survival.

Similar, in form, to Treyarch's various Zombie distractions, Survival traps up to two players in tight, fractured environments and pits them against successive waves of lunatics. Replacing bullet-sponge zombies are a variety of foes, from shotgun sprinters and helicopters, to tank-men and Hundeminen. The shill also gives us a prolonged glance at the aesthetics of Modern Warfare 3 - looks like the series is going back to the dour rubblescapes of Call of Duty 4.

Edited 18th September - the Sailor Moon video got pulled; so here's the official clip instead.
Posted by Chris Ready at 16:16:00 0 comments 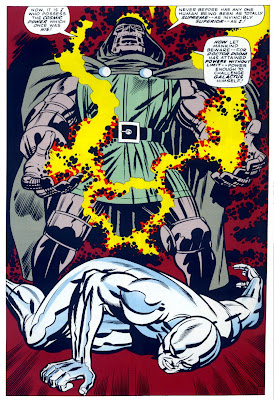 Disaster Year 20XX loves Jack Kirby. As such, I am very happy to back Stephen Bissette's call for a boycott on all Kirby derived Marvel properties until the Kirby Estate receives adequate remuneration for his hand in creating their pantheon - I don't think it unreasonable to expect something similar to the annual suborn Stan Lee receives for his silence / complicity.

The preceding review of the pretty wonderful Captain America: The First Avenger will be the last piece of Marvel derived content for the time being, and no further coverage of the various iterations of Marvel vs Capcom 3 will be posted. Although, I hardly expect Marvel Comics to break out in a cold sweat at the prospect of their product no longer being covered by a niche pulp culture blog, it is my feeling that if every Jack Kirby fan does their part we can perhaps blacken their greedy, greedy little eyes.
Posted by Chris Ready at 15:43:00 1 comments 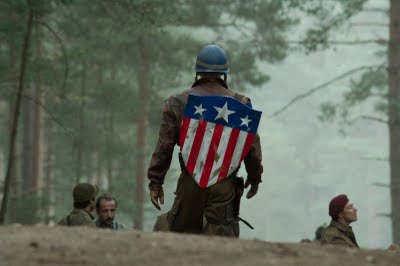 Captain America: The First Avenger takes a character that could be perceived as a jingoistic brute and presents him as the earnest, physical manifestation of the Greatest Generation. Steve Rogers is small and sickly, but possessed of backbone and keen lateral thinking. Taken under the wing of German super scientist Abraham Erskine, Rogers is involved in an army run mensch program designed to stress the kind of post-identity idealism required to become a symbol.

This is were the film excels. Rogers, as Captain America, isn't written to be a downtrodden jerk enjoying the newfound power or status gifted to him by Dr Erskine's sun lamps. Instead, he's the exact same grafter he's always been. Rogers still fumbles around women, he oozes discomfort around actual soldiers. He carries no bitterness, or self-pity, even when the super soldier program blackballs and Rogers finds himself lost in vaudeville and propaganda. He grits his teeth and jobs.

Rogers doesn't abuse his abilities, instead he locates the task and knuckles down. He never cats about with his dancers, or re-visits a bully for a settler either. He seems to understand himself in the abstract - the human embodiment of the kind of virtues essential to the population of any country locked into an extinction war. Rogers excels as Captain America, first as a song and dance man shilling for war bonds, eventually as a one-man answer to Hitler's Satanic science division.
Posted by Chris Ready at 18:22:00 2 comments 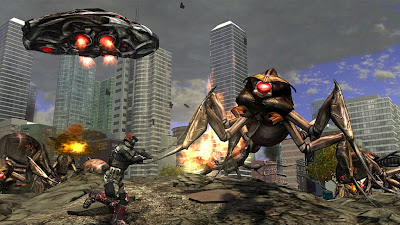 Earth Defense Force: Insect Armageddon feels more like an experiment than a fully fledged series installment. It's a mongrel title stuffed with clashing styles and mechanics; city set Space Invaders with an active reload time waster borrowed from Gears of War. The game is a muddle. EDF's usual bulletin stages replaced with lightly sprawling missions, full of press-and-hold objectives. The candy coloured world of Earth Defence Force 2017 has been washed with bricks; staffed with grit teeth army dudes, rather than slight scrap chaps. The tokusatsu enemies have been made over to resemble the kind of sub-Transformers automatons last seen jobbing in Terminator: Salvation. The gee-whizz zeal of 2017 is more or less absent. Weapons err puny, the Campaign peters out without resolution, and the majority of achievements require a satirical amount of repetition. There's none of 2017's incremental meta-progression either. Power-up drops are rare, and armour beefing revolves around a Call of Duty style levelling system that demands utter dedication for little immediate reward. Despite some fine-tuning that eases 2017's hard-nosed approach to failure, Insect Armageddon is a mess. A half-hearted sequel hamstrung by needless feature creep, and routine re-calibration. Above all, the title feels rushed. A half-finished mutant dumped to market in a hurry to keep brand ticking over.
Posted by Chris Ready at 17:48:00 0 comments

BY THE POWER OF GRAYSKULL

Eight minutes of frenzied back-biting serve as tease for Toy Masters, a forthcoming documentary that apparently creates a shit stir back-and-forth between the men convinced that they created the Masters of the Universe toyline. A noble endeavor! He-Man's always of interest to 20XX, Snake Mountain sits dusted in a corner of my room, a Christmas gift from my late Nan. Completely excellent to see such seething resentment, not to mention utter bafflement, at the core of a series of toys that revelled in satanic sugar-rush character designs. Maximum ugly!
Posted by Chris Ready at 17:32:00 0 comments 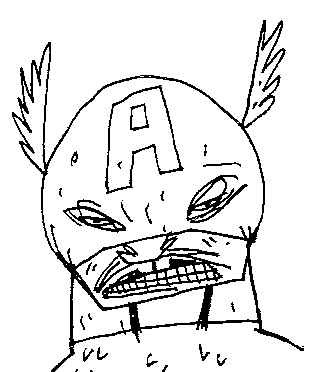 MMA pip Gina Carano makes her movie mangle debut in Steven Soderbergh's Haywire. Aside from a Shane Black lead-in, Haywire has an icy Euro chill similar to The Bourne Identity, Ronin, Universal Soldier: Regeneration, and a couple of other mutant action flicks shot on the continent. Remember! Stark, mechanical violence always looks best set against winter climes. Soderbergh hints he's got action nailed too with these fleeting glances at abrupt, stiff ultra-violence. Fuck with Ms Carano, and she'll mule you through furniture.
Posted by Chris Ready at 17:00:00 0 comments

"It's a twenty block walk to the enemy camp."

This animated adaptation of Batman: Year One has caught a whiff of Internet flack for casting The OC's Ryan Atwood as the perpetually brooding Bruce Wayne. Big deal. I'm a little more worried about the tin-eared gobbledygook that passes for Frank Miller rhetoric speak. Do you think 'healing' or 'closure' are even in the vocabulary of Miller's Batman? Do you imagine that those concepts even exist in his mind? I do not. I would also posit that crafting a screen version of this four ish wonder is redundant; the tale was strip-mined to backbone Batman Begins (Miller got a cheque apparently), and a great deal of the first case colour made its way into Batman: Mask of the Phantasm. Good thing our girl Lauren Montogomery's on the case, so at the very least, this'll be zippy.
Posted by Chris Ready at 16:03:00 0 comments 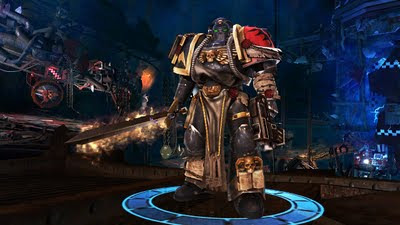 Warhammer 40,000: Kill Team is intended as bite-size hype for THQ's upcoming franchise jump-off Warhammer 40,000: Space Marine. Unfortunately, Kill Team somewhat bungles the message. Space Marine dev chat spins on the idea that rather than allow the player the kind of superhuman agility typical to third person action adventuring, they'll instead get to mess around with a man-shaped tank able to thump frothing, alien armies single-handedly. The gift being prepped revolves around a lightly invincible cosmic thug.

In that sense, Kill Team is often alarmingly off-message. The single player campaign is defined by a constant sense of fragility. Weapons, while distinct and appropriately vulgar, feel puny in the face of incessantly reinforced Orks. Typical play boils down to dull circling, blasting in all directions, desperately trying to inch down the enemy avalanche. Get surrounded, and your energy'll shrink in a flash. Kill Team has been assembled with a miser's eye to progress. Tiring boss encounters are usually followed by instant death cheap-shots, and unreadable environments are riddled with illegible sinkholes. Stick with Kill Team until the bitter end and you'll often be battling charcoal Velociraptors in pitch-black environments. Some maniacs given them green snot sniper rifles too. Kill Team recalls shuffle progress arcade machines, programmed to mug. At least with those titles you could pump in continue money. Here, if you're unfortunate enough to not have a revive buddy on-hand, you're more likely be kicked back ten minutes to endure another unskippable cutscene, and the deadly unfair encounter that caused your demise. Kill Team is anti-hype.
Posted by Chris Ready at 15:34:00 0 comments