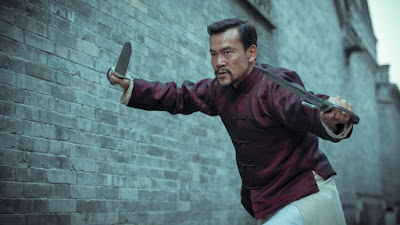 Xu Haofeng's The Final Master plays around with the assumption that onscreen martial arts experts are austere, unfeeling machinery. The writer-director (most famous in the west for co-writing Wong Kar-wai's The Grandmaster) presents his characters not as surging, unconquerable heroes but as sweaty human beings who have to fit in or around the bizarre sociopolitical etiquette of an untouchable, self-appointed ruling class. Liao Fan's Master Chen Shi is not presented as an avatar for justice or decency then, he's simply a man. The last member of a waning dynasty who wishes to settle in the combat school mecca Tianjin and make a living passing on his teachings.

Unfortunately this is not a simple process, in order to be allowed to open a school by the other, established educators Chen must jump through specific, florid hoops while simultaneously maintaining an outward appearance of spontaneity. A less complicated film might have the stern, lightning-quick Chen rock up and dole out lessons to his corrupt peers. The Final Masters though is happy to submerge its unbeatable hero in these machinations. Chen plots and corrects; using other people's lives and dreams as stepping-stones to further his own ends. This callousness is refreshing and, frankly, tallies with the kind of focused, ego-maniacal edge required to power through decades of punishing repetition and revision.

Chen has devoted his all to developing a self-defence style that transforms its practitioner into a flurry of attacking, angular arms. Of course his perspective is skewed. He's seeing his impact as a lineage that will live for centuries, not as the discourtesy of an indifferent day-to-day. Chen's route to his dream is circuitous and illogical, forcing him to slum it in a battered house, take on a wife he is happy to dispose of later, and train a student for, essentially, the slaughter. The strength of his style, in terms of an actionable, analytical result, is immaterial against the serpentine route he has taken to please his contemporaries - class and decorum are just additional weapons for the establishment dojos of Tianjin.

As plot devices they strengthen and complicate a structure of interaction that frustrates open conflict. That is why it's all the more satisfying that, eventually, The Final Master places Chen Shi at one end of an alleyway and a city's worth of heavily armed martial arts masters at the other. Chen, armed with two thick knives, battles through the crowd, asserting his dominance. The film's soundtrack collapses, until all we're left with are brief notes to confer intrigue (a welcome change from the farcical sitcom transition music heard elsewhere in the film) and the sounds of human exertion. Steel swishes and slashes, hammering the audience with the idea that all these weapons are lethally sharp, that just one mistake could be death. From Chen's perspective though this fight, or rather the violence he's directing towards it, is neither blood-thirsty nor desperate. His proficiency is such that he affects a relaxed, reactionary stance when meeting with the swings of his fellow experts. He adapts then overcomes, demonstrating both the flexibility and superiority of the movements he has drilled into his body.
Posted by Chris Ready at 21:44:00