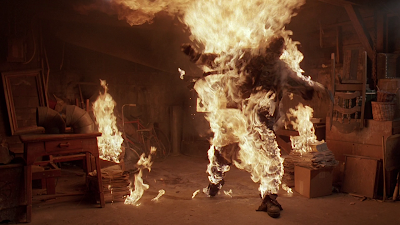 For the vast majority of its runtime Friday the 13th Part VII - The New Blood is a slog, mixing a thoroughly unlikable take on teenage life with boring, perfunctory murders. John Carl Buechler's film, written by Manuel Fidello and Daryl Haney, drips venom, particularly when considering the female cast. Diana Barrows' Maddy is punished for daring to put herself out there while Susan Jennifer Sullivan's Melissa is an out-and-out bully, teasing boys for their sexual inexperience and directing straitjacket skits at shy love rivals. Melissa Is cruel and manipulative in a way that feels incongruous for a series built around horny, slightly stoned kids. It does mean that Jason gets to intrude on a fresh emotional stage though - the rotting slasher arriving just in time to puncture the kind of atmosphere that settles on a party when a vocal brat hasn't gotten their own way.

Fortunately The New Blood kicks up about twelve gears for its finale. Lar Park Lincoln's Tina has Stephen King powers, able to break and twist inanimate objects with her mind. Tina unlocks these telekinetic capabilites through trauma, discovering them as a child fleeing from her boozed up, abusive Dad. Years later, saddled with a creepy father figure who's more interested in Tina as a money-making opportunity, she attempts to resurrect the imperfect man she buried under a jetty, unwittingly freeing the sunken Jason instead. Tina's ability to endure, facing Voorhees in her collapsing childhood home, has a knock-on effect for Jason. The mouldering, pointedly virginal murderer is realigned with the towering, terrifying heads of household who relish stomping around their space, using the suggestion of violence to silence their women. Buechler is even brave enough to distort Jason during this finale by taking away his cool, emotionless mask. Without it the killer is rendered ugly and unappealing, a crumbling prehistoric face frozen in a perpetual honk.
Posted by Chris Ready at 21:49:00