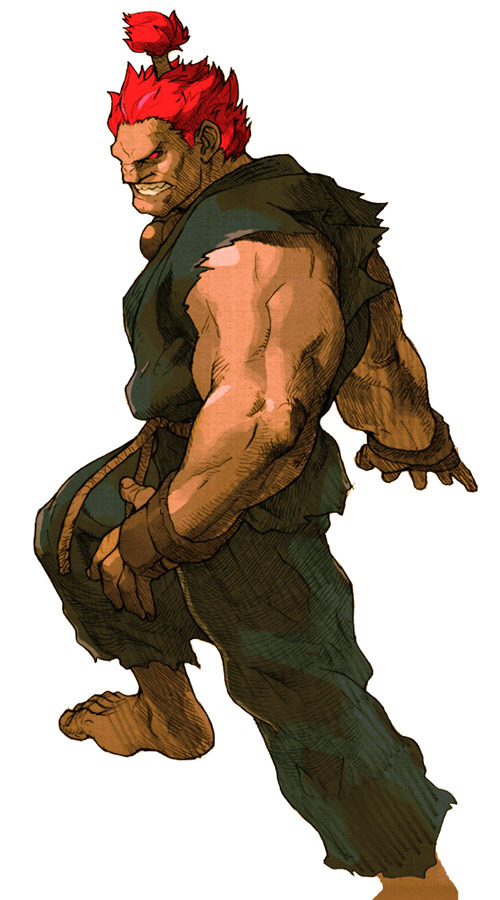 Run The Jewels - Get It 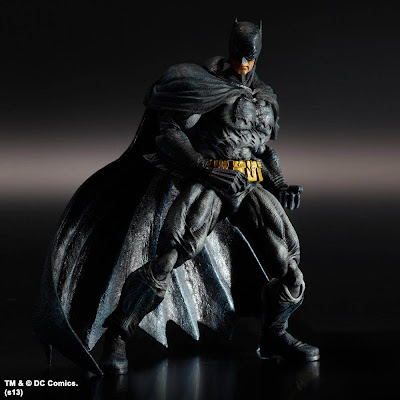 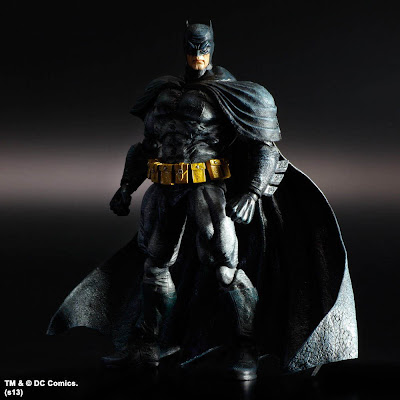 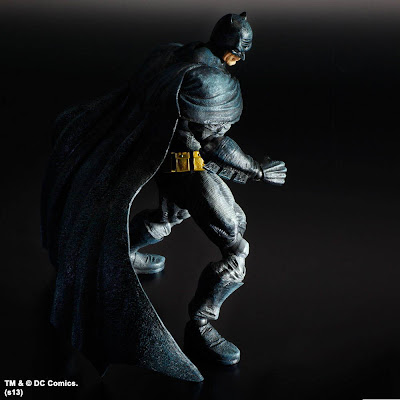 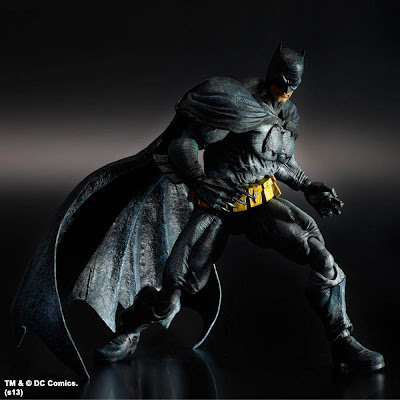 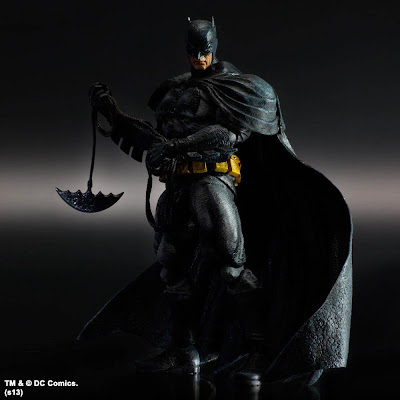 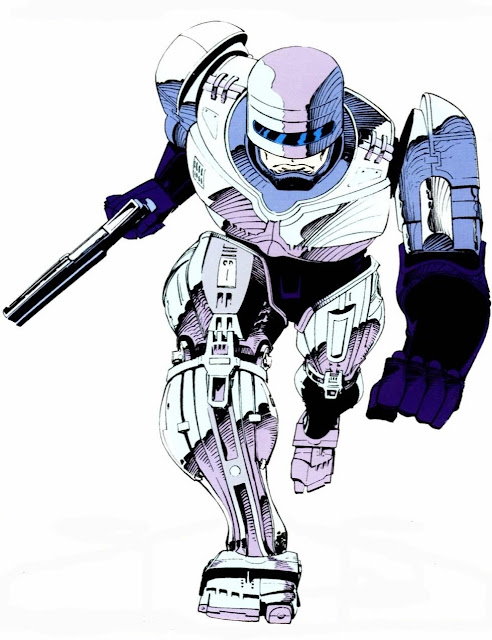 As I've noted before it's been interesting to see how the YouTube community surrounding Call of Duty has evolved over the last few games. I think it's fair to say the wider audience for pure montage work or extreme superplay isn't really there anymore. Some of the more vocal uploaders are frequently heard kvetching about dead subscribers and slashed partner incomes. People have probably gotten bored too, both player and viewer, we are on the eighth Call of Duty for this generation alone.

This is quick-scope king Zeyrion's last clip to date, uploaded in January.

That trend for herculean efforts apparently burnt itself out with the last game Modern Warfare 3, which got to a point where every other video seemed to have a dubiously acquired 30+ killstreak. It didn't help that the actual systems that game operated with made watching this kind of clip uninteresting - lenghty streaks took advantage of predicting so-called revenge spawns, meaning this high-level play was basically just a guy wildly patrolling a small area picking off people rushing blindly, repeatedly attempting to get their own back. There was also an idea that most of these scenarios were set-ups, with channel directors recruiting willing subscribers to die on cue.

If my subscription box is any indication of prevailing trends, viewers now instead seem to want to a more personable experience - long unbroken gameplay with a voiceover dabbling in unconnected water cooler chit-chat. With this in mind it's interesting to see how TheSandyRavage has adapted. Ravage's Modern Warfare 2 videos were characterised by extreme twitch feats and Duke Nukem sound boarding. He refused to do commentaries, claiming he was too boring. Instead he recruited others to provide hype, most notably ELPRESADOR.

For Black Ops II this format has evolved into Ravage and his pal fickmoley chatting shit with each other over what constitutes their day-to-day playing experience. Uploads are regular, with the duo drafting in other YouTubers like ONLYUSEmeBLADE and Mr Sark for flavour. I think I remember Ravage saying he'd finished university and was having trouble finding a job, so presumably he's hoping to generate a consistent stream of revenue with this output. Good luck to him. As well as providing fun clips, he and Moley have the kind of easy rapport that's always pleasant to listen too. It's certainly preferable to channels that feel the need to provide bizarre, borderline offensive dating tips in their struggle for content.

Another channel worth checking out is Xbox Ahoy who presents weekly weapon breakdowns. His detailed assessments of each game's guns proved so popular that Activision hired him to create Modern Warfare 3 vids exclusively for Call of Duty Elite. I'm actually stunned it's taken me this long to post one of his videos, I've been a channel subscriber since the dying days of Modern Warfare 2. Xbox Ahoy's work is incredibly well produced and manages to convey massive amounts of information without ever becoming dull. As a taster, here's his analysis of the MSMC, possibly Black Ops II's most multi-purpose firearm.

If that tickled your fancy, Xbox Ahoy also has a supplementary channel focused on viewer feedback and games not named Call of Duty. Tune back in next month when there'll probably be some concrete news on the next instalment - Call of Duty: Ghosts. SLIDE INTO COVER.
Posted by Chris Ready at 22:11:00 0 comments 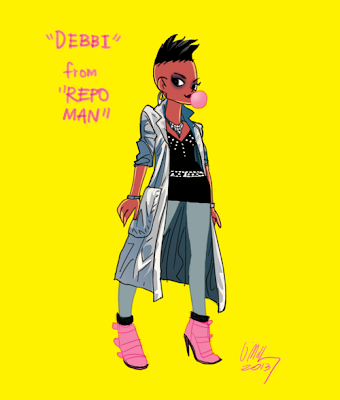 RADIOMARU via Supervillain
Posted by Chris Ready at 19:55:00 0 comments 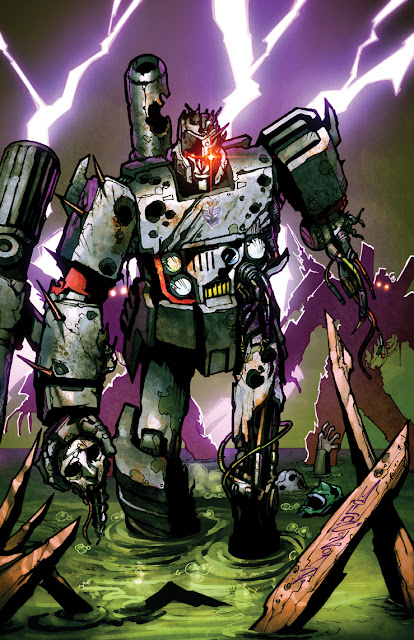 Another The Evil Within video from IGN, this time featuring Shinji Mikami and Tango Gameworks staff saying exactly the sort of things you want to hear if you're building the project up to be Resident Evil 4 part 2.
Posted by Chris Ready at 13:02:00 0 comments

Looks like Shinji Mikami and Tango Gameworks have been hard at work cooking up a spiritual successor to the director's Resident Evil instalments. Watching the later episodes of the YoVideogames Resident Evil retrospective recently had me thinking - why aren't Capcom's horror games trying to be scary anymore? Mikami's GameCube reworking of Resident Evil works hard to create a certain level of tension. Ammo is scarce, enemies take a beating, and everywhere you go is damp and depressing.

Capcom's idea of what survival horror should be has moved so far away from what Mikami and Production Studio 4 were doing in 2002 that the eleven year old game looked fresh and new again. The Evil Within debuts with a a video clip that looks like a grimecore update of the live action FMV that played on boot for the original PlayStation Resident Evil. As a proof of concept this at least looks like survival horror rather than a hamfisted suits attempt to get Gears of War kids to pony up for Japanese games. 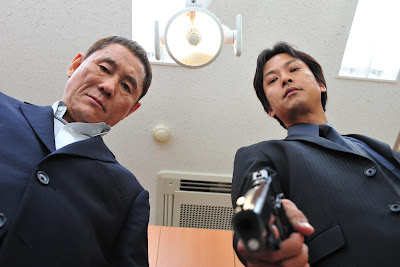 Hilariously, Outrage is Takeshi Kitano's idea of a commercially appealing gangster film. If the people want him to move away from introspective whimsy and double back to Yakuza carve 'em ups, that's exactly what he'll give them. The writer-director has spoken about the film being conceived as a vehicle to deliver a series of horrific injuries and deaths that he'd thought up but never previously found a use for. Thus Outrage operates like an airless murder factory. Various criminal gangs manufacture justification for their atrocities, then ruthlessly deliver on this violence. No-one is particularly sympathetic, we learn nothing about anyone beyond their ability to sit around waiting to be brutalised This is criminality as a state of nihilistic, cosmic, indifference. Outrage demonstrates the same sense of humour that brought befuddled Famicom fans a video game like Takeshi no Chosenjo, a prank title in which players were forced to complete a series of mundane, and extremely irritating, tasks to fractionally advance gameplay.
Posted by Chris Ready at 21:17:00 0 comments 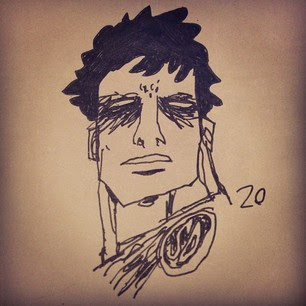 A quick scratch of John Wagner and Carlos Ezquerra's mutie merc, ghetto-scanned with my new iPhone.
Posted by Chris Ready at 20:52:00 2 comments

Deftones - My Own Summer (Shove It) 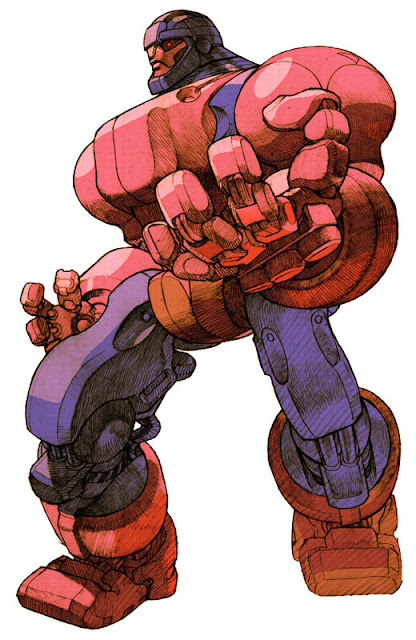 Disaster Year's 2012 Game of the Year gets a download follow-up that looks like someone spent their formative years punching trashy Italian science fiction into their brain. Michael Biehn stars as Rex Power Colt a grimacing cyborg who seems to have jacked RoboCop for his pistol.
Posted by Chris Ready at 23:04:00 0 comments

Cool But Rude by Ronald Wimberly 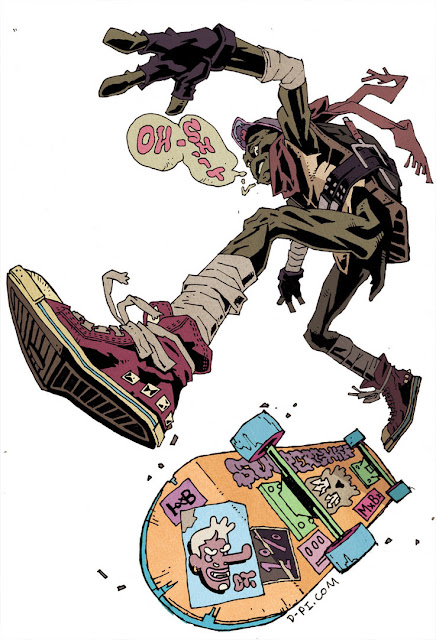 If you've got a Threadless account you can vote to get this design on a t-shirt.
Posted by Chris Ready at 22:34:00 0 comments 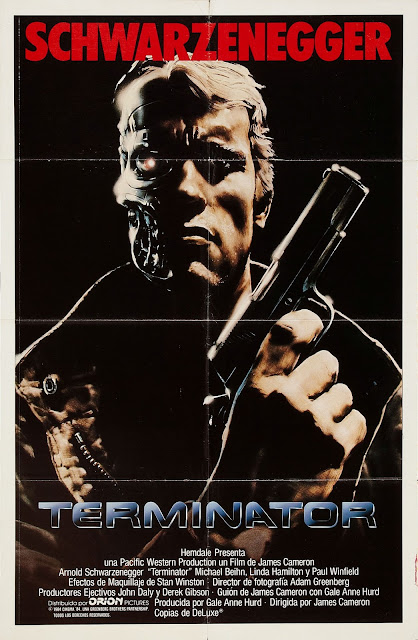 The revised title sequence for Season 2 of The Transformers, featuring animation and events roughly a million times more dynamic than anything actually in the show.
Posted by Chris Ready at 21:16:00 0 comments 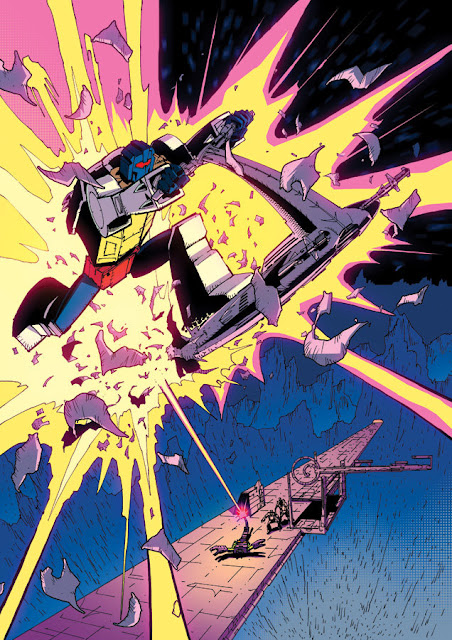 Soulwax - Much Against Everyone's Advice

Email ThisBlogThis!Share to TwitterShare to FacebookShare to Pinterest
Labels: television, The Simpsons, tv

The Hound by Warwick Johnson Cadwell 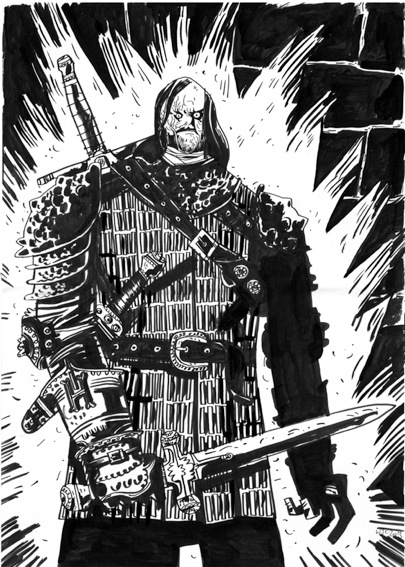 Email ThisBlogThis!Share to TwitterShare to FacebookShare to Pinterest
Labels: A Song of Ice and Fire, Warwick Johnson Cadwell

Nicolas Winding Refn and Ryan Gosling follow-up Drive with Only God Forgives, a Thailand set thumper about an underworld enforcer trying to discover who snuffed out his brother while his gleaming harridan of a mother gazes on. The ads light on details, but Gosling dragging a man around by his jaw would seem to promise a similar juice to their last collaboration. My last few viewings of Drive have given me a Blade Runner vibe - both films move on their music, using it to explain extrovert feelings for introvert people. Like Deckard, The Driver is a still figure anchored to his apartment, and capable of extreme violence.
Posted by Chris Ready at 23:42:00 0 comments

Resident Evil 6's Mercenaries mode running on PC - how's that for monster mobbing? Superplayer FluffyQuack does an excellent job of juggling resources, and manhandling rot crowds, whilst maintaining an instant clear kill combo. This clip also serves as a great demonstration of all the diving hidden attacks the game never actually bothers to teach you. This is the tragedy of Resident Evil 6. There's a solid, exciting system in place that only really gets to shine in this unscripted mode, outside the campaign's dreadful moment-to-moment planning.
Posted by Chris Ready at 13:29:00 0 comments

Hulk vs Thing by Simon Bisley 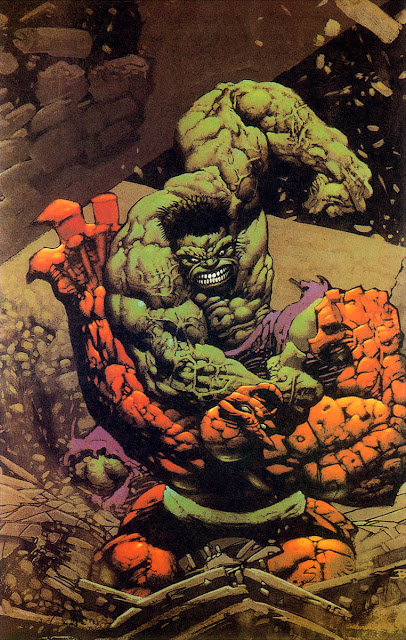 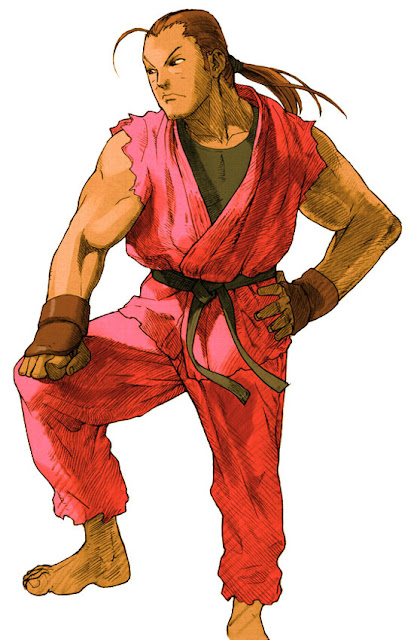