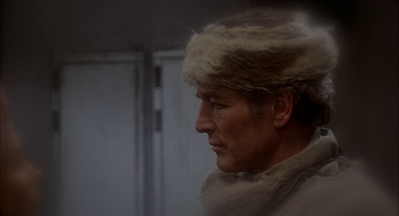 Quintet proposes an apocalyptic white-out, with mankind's few remaining survivors battered to the point of extinction by a new ice age. Paul Newman's Essex and Brigitte Fossey's Vivia are seal hunters, forced south thanks to a scarcity of prey. The city they discover on their trek is shattered, a draughty expo centre gripped by the abnormally cold weather and a complete breakdown in basic human community. The remaining people within are all middle-aged adults, either hypothermic derelicts - a constant source of food for the packs of muscular, well-fed, dogs that nose around the corner of every frame - or local dignitaries, piled with thick, medieval looking, shawls and locked into roles and a class structure that this world, very clearly, no longer has any use for.
Robert Altman's film, co-written with Patricia Resnick and Frank Barhydt, has an almost academic detachment from its subjects, preferring to watch, allowing us to analyse their actions and behaviour rather than press deeper into their emotional struggles. The heaps of padded clothing help in this sense - we're never in danger of discovering any particularly private moments. The string of murders that prod the plot along are executed with the bored detachment of a parlour game winding down; an outrageous series of crimes staged with all the panache of a minor, nagging, correction. The total freeze - and the doom this weather foretells - has chilled these people to a state of almost-static inactivity. They have given up. No-one really helps anyone else. Even the doomsday mission ran by Vittorio Gassman's bloviating Saint Christopher registers like a massive play-act, the self-styled holy man dishing out mere gulps of the prop soup we see churning in a massive, bubbling, cauldron.
Quintet nudges along, events prompted by a board game that has become the totality of this dying culture. Abstract Draughts tournaments continue in spite of the extinction event raging all around the players, Essex pulled into these matches while investigating the murder of his wife and brother. He takes on the identity of another, hacked-up, player - a mask that fools absolutely nobody. The other competitors, staging a maxi-stakes version of the titular game that requires they plunge their knives into each other, barely take any notice of Newman's snooper. Quintet models a destitute psychological perspective, one so completely devoid of hope that the end of the human race fails to inspire any level of cooperation. The most beautiful moments in the film then revolve around the ad-hoc burial Essex stages for the departed Vivia. Rather than allow any of the roaming Rottweilers to sink their teeth into her, Essex burns precious calories carrying her body from a gutted apartment, out of the city itself, all the way to a nearby glacial stream. He sets her down as gently as he can, allowing the water to whisk her away. Through Essex's efforts Vivia is the last member of the human race loved enough to be given a funeral.
Posted by Chris Ready at 14:20:00