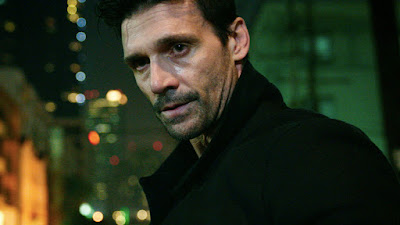 Two films in, it's clear that James DeMonaco's The Purge series lacks the raw, blood-and-guts determination to really deliver on its exploitative, class war premise. DeMonaco's first instalment took the perspective of the upper middle-class, people who had accumulated wealth and had something to lose. Aside from an exceptionally slack second act, DeMonaco fumbled his sitter with situational writing that seemed incompatible with a central idea that demands citizens compromise themselves utterly in the face of their new America. It was also pretty difficult to get excited about a Lena Headey performance that choose teary-eyed compassion over the actresses' trademark venom.

The Purge: Anarchy makes a few key changes. First the scale is exploded, taking place across an entire city rather than one walled estate. Government extermination squads trundle around in 18-wheeler trucks, attacking tower blocks while opportunist street gangs kidnap defenceless poors to be auctioned off during well-to-do ballroom functions. Secondly, this Purge follows characters with objectives that are compatible with, rather than upset by, the chaos. There is opportunity. Frank Grillo's Sergeant stands to make a personal gain from the prolonged lawlessness. DeMonaco frustrates his revenge by loading him down with helpless strays that only he, a hero, has the training and inclination to protect.

DeMonaco, himself the credited writer on 2005's buttoned-up Assault on Precinct 13 remake, is happy to tread water, using this film to invoke the individualist, anti-authoritarian cool of John Carpenter's oeuvre without any of the associated grit. Grillo, decked out in magic sunglasses, stomping and gunning down a scrum of rich but incompetent hunters may be fun but Anarchy's decision to tie its emotional summit up in fake-outs and last minute change-of-hearts stinks like compromise. The Purge: Anarchy does have one excellent scene though, one predicated on the idea that guns and the permission to use them does not, as the NRA would have it, equalise situations, rather they needlessly raise the stakes of basic, domestic disintegration from weepy and intolerable to pointlessly lethal.
Posted by Chris Ready at 22:11:00