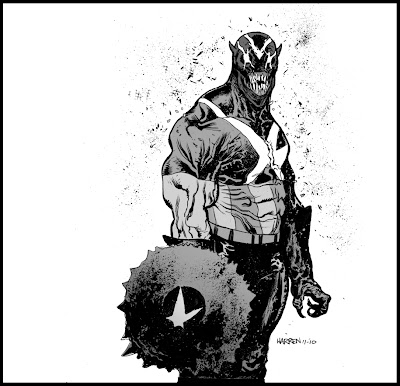 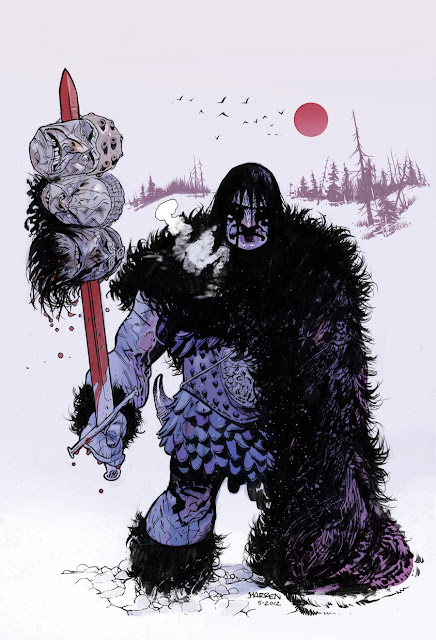 John Parr - Running Away With You / Restless Heart

It's still early days, but there does seem to be a marked lack of superplay clips available for Call of Duty: Black Ops II. Maybe I follow the wrong YouTube channels, but at this stage commentator focus is pitched squarely at teaching and explaining the various systems and mechanics in place for this years sequel. Although both clips embedded above are basically class specific tutorials, they do have some nice streaking. 20XX fav TheSandyRavage fools around with one of the more obviously useful shotguns - the Remington 870 MCS, while Maximilian pairs the futuristic B23R with a RoboCop soundboard.

Perhaps this is just how the YouTube commentator scene has evolved. The Theatre Modes included in the last few Call of Duty games have rather turned up the noise ratio on gameplay clips. Anybody with even the barest inclination can edit and upload short bulletins from their latest triumph. Established personalities, who often make their living by maintaining a steady stream of subscriber content, have to be seen doing something different, hence chatter lead instructionals. It's also likely that this lack of sustained killstreaking has a lot to do with the wonky connectivity issues most people seem to be experiencing. Here's ELPRESADOR struggling through a typical game.

To be fair to Treyarch, this is always a problem with Call of Duty games, especially in their first weeks of release. Treyarch's problem, like Sledgehammer Games and Infinity Ward's last year, is that the overall design of the actual multiplayer experience does very little to hide these problems. Like Modern Warfare 3 maps are small and dense with choke points. With map knowledge bordering on zero, most players tend to charge around blindly searching for prey. Couple that with a game pace that favours one specific class of weapon - in this case the dash flexible sub-machine guns, and you have an experience not unlike a total clusterfuck. The first week of release was awash with players sprinting around hipfiring compact bullet hoses. It reminded me of Call of Duty: World at War, Treyarch's 2008 instalment in which nothing could hold a candle to an MP40 coupled with the Steady Aim perk.

If you're disinclined to this style of play might I recommend putting some serious time into levelling up the single shot FAL-OSW? This futureshock upgrade of the old NATO fav has a nifty little trick up its sleeve. Since the weapon is designed, and presumably balanced, to fire in the singular, the damage it deals is particularly ruinous. Put enough time into any assault rifle and you'll unlock a select fire option that allows fully automatic weapons to fire off singular rounds. This attachment has quite a different effect on the FAL-OSW and the SMR, it allows these one-shot rifles to become fully automatic. For long-term players it's an amusing feature - Treyarch have essentially legitimised a way of playing previously considered cheating. It is no longer necessary to root through eBay looking for modded controller auctions; grind out a weapons skill tree for long enough and you can spam with the best of them. For maximum bullying, pair the Select Fire attachment with the Target Finder, an optical addition that highlights potential victims with little red boxes. It's so good, I can't believe I'm not getting hate mail.
Posted by Chris Ready at 00:55:00 0 comments 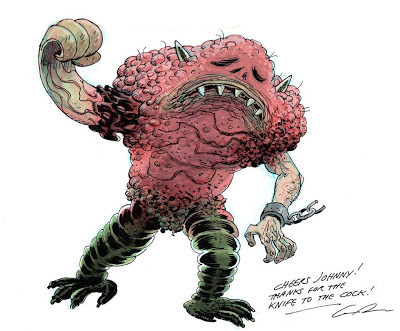 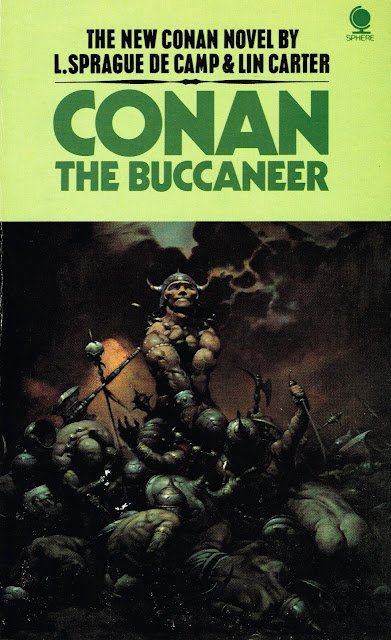 I remember finding this paperback on a rack outside a book shop in Cornwall when I was about ten. Since Masters of the Universe and its muscle bomb mutants played an integral part in shaping my childhood tastes, this Frank Frazetta sinew strainer instantly set off a pinballing brain explosion. It's an absurd image - a hyper-muscled Conan, sporting a Viking helmet, choking out a series of green-skinned lizard men. He seems to have clobbered the lot of them with just his bare hands. Amazing. I doubt I ever read more than about a page of it, although I did later acquire a paperback adaptation of the first Schwarzenegger Conan film at a Christmas Fair whilst rooting around for second-hand Fighting Fantasy books.

007 VS THE ROCK'S GRANDFATHER

See that fella hurling Sean Connery about the place? That's The Rock's Granddad that is. Peter Miavia served as an uncredited stunt fight co-ordinator on the fifth Bond film You Only Live Twice, presumably choreographing this desperate, sofa hurling encounter.
Posted by Chris Ready at 18:47:00 0 comments

The Evil Warriors by Oliver Patricio 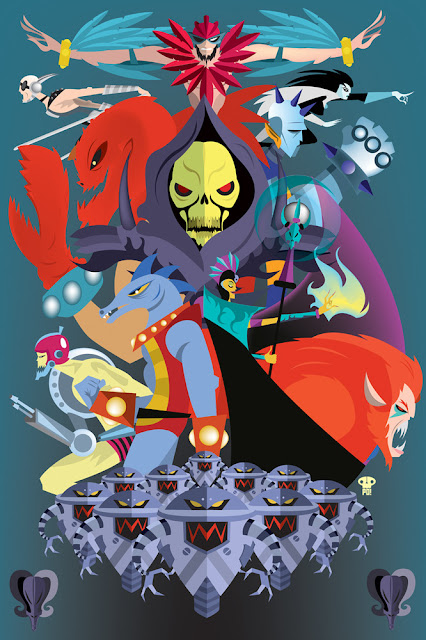 Email ThisBlogThis!Share to TwitterShare to FacebookShare to Pinterest
Labels: Masters of the Universe, Oliver Patricio

The Heroic Warriors by Oliver Patricio 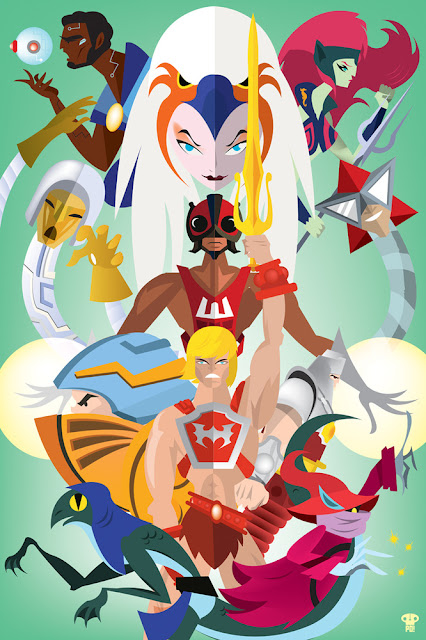 Email ThisBlogThis!Share to TwitterShare to FacebookShare to Pinterest
Labels: Masters of the Universe, Oliver Patricio

How in fuck is this getting slated on release? Gotta nab me a region free Blu-Ray player and this Criterion disc.
Posted by Chris Ready at 21:20:00 0 comments 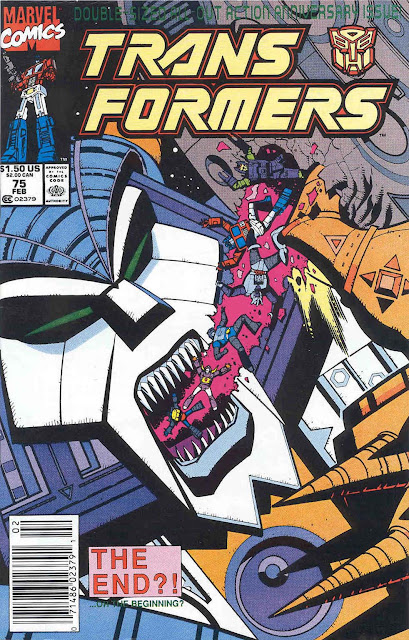 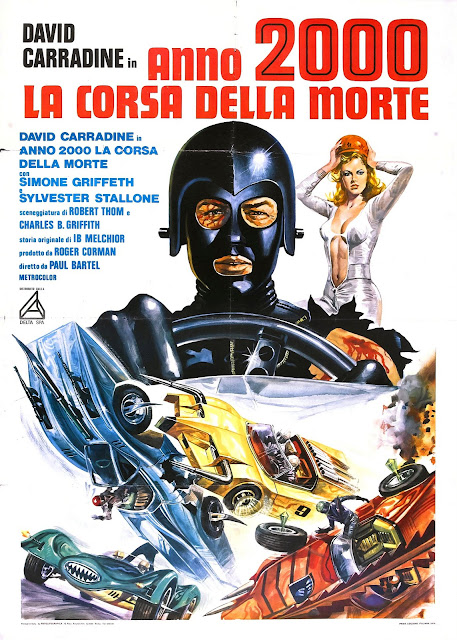 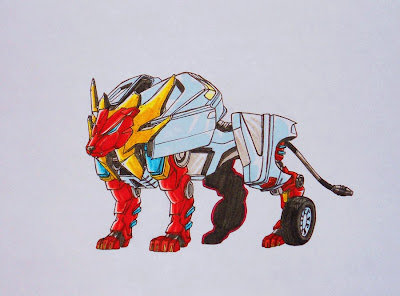 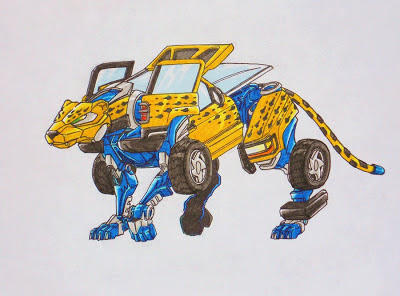 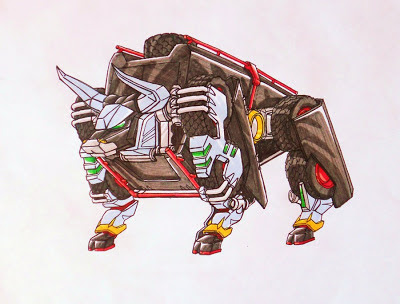 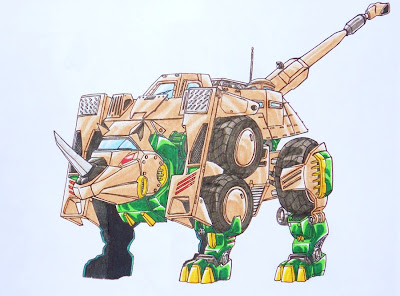 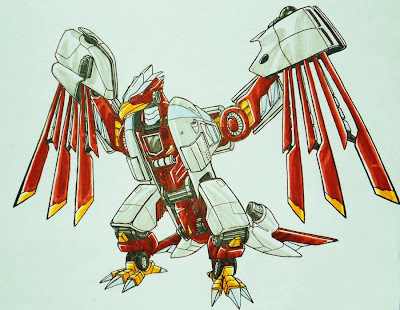 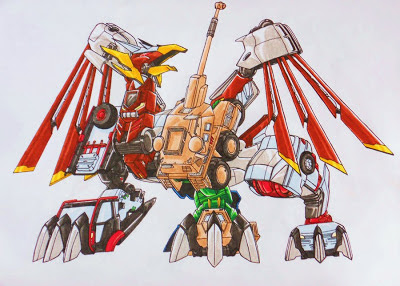 The Anibots were an Autobot combiner team described in early drafts of The Transformers: The Movie scripts. This unit of wild, robotic animals dwelt in the Roboto-Zoo portion of Autobot City, seemingly created by Wheeljack to act as a desperation deterrent in times of crisis. When threatened the Anibots can combine into a gigantic, monstrous form called Dragon-Beast.

Although the sub-group never made it into the final film, the idea of a band of predatory hunter animals turned up the following year in Season 3 of the TV series as the Predacons, a Decepticon combiner team. In the draft written by Ron Friedman, dated April 27th 1985, no alternative modes are described for the Anibots. Instead the team are characterised as beasts of lower-order intelligence - Wheeljack's pets essentially. Unlike the humanoid modes the Predacons feature, these pieces by Kishiaku embrace this apparent lack of sentience by conceptualising the Anibots as being able to shift back and forth between vehicle and animal modes.
Posted by Chris Ready at 23:30:00 0 comments

Email ThisBlogThis!Share to TwitterShare to FacebookShare to Pinterest
Labels: Concept Art, The Transformers The Movie, transformers 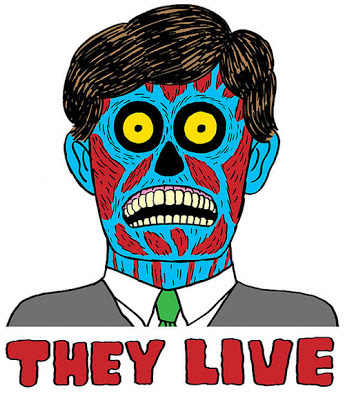 Email ThisBlogThis!Share to TwitterShare to FacebookShare to Pinterest
Labels: Johnny Ryan, They Live 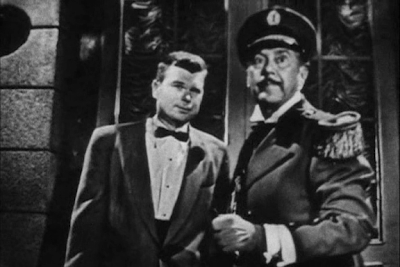 Barry Nelson's Jimmy Bond isn't the frenzied, sexually aggressive, thug we might expect. This American draft doesn't navigate his adventure with the detached indifference synonymous with Ian Fleming's British super-spy. Bond is tense, even jittery here. When his ex-girlfriend's life is under threat he's panicky and shrill; careening back and forth between telephones and allies, desperate for some sort of update. This lack of emotional control is intensified by Nelson's breeze block head and cherubic features. He looks like a safer, television friendly, alternative to Ralph Meeker. Nelson, friendly and approachable where Mr Meeker reads as louche, even dangerous. Screened live as part of CBS's Climax! anthology television series, this Casino Royale is a creaky, but intimate, run around the broad outline of the first 007 tale.
Fleming's characters are broken down and reconfigured - James Bond becomes Jimmy Bond, a Combined Intelligence operative with a supernatural flair for the obscure card game baccarat. René Mathis and Vesper Lynd are roughly combined into a composite identity named Valerie Mathis, a French spy and former lover of Jimmy's. Perhaps in recognition of this Bond's national identity change, Felix Leiter is transformed into Clarence Leiter, a British counterpoint for the nervy Jimmy who has been blessed with a roaming, chilly, arrogance. It's interesting then - in light of the subsequent Eon film franchise - to note that zero effort is expended to portray this character as a brutal snoop. Instead Jimmy plays more like a desk guy drafted solely for his card smarts. So while he might be able to resist a round of toe torture, his subsequent break out is marked by an inexpert application of violence and, most disappointing of all, mercy.
Posted by Chris Ready at 14:26:00 0 comments 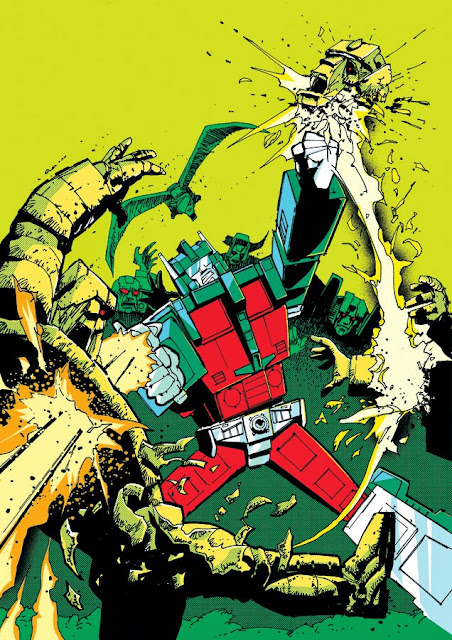 Aliens Versus Predator by Mike Mignola 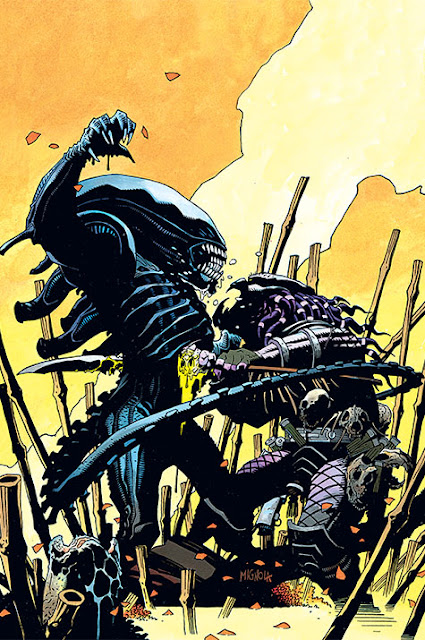 Pre-ordered up Call of Duty: Black Ops II fans can look forward to thumping around this future-pop reinterpretation of Treyarch's most cherished multiplayer map. Nuketown 2025 is less Indiana Jones and the Kingdom of the Crystal Skull (how fucking long is that stupid title?), and more Googie architecture by way of The Jetsons. Given Modern Warfare 3's maddening ring a ring o' roses map design, and what that might mean for the future of the franchise, it's nice to see this sequel at least has the claustrophobic symmetry of Nuketown going for it.
Posted by Chris Ready at 18:15:00 0 comments