Justice League vs The Fatal Five 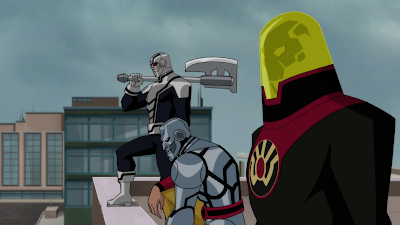 Justice League vs The Fatal Five aspires to be a movie length episode of Justice League Unlimited. The home video release ropes in voice actors from the classic TV series and Bruce Timm's clean, angular, art style to tell a not particularly interesting story about time-travelling criminals and the mental health worries of teenage superheroes. Aside from the above window dressing, the closest Sam Liu's latest comes to summoning up the vim of its antecedent is in the decision to build itself around lesser known characters. At its peak, Justice League Unlimited was a popped-out plunge into the DC back catalogue; twenty-minute gasps that dredged up a procession of heroes and villains to be pulverised by Dr Fight himself, series co-director Joaquim Dos Santos.

Unfortunately Dos Santos and ace collaborator Lauren Montgomery are both long gone from the DC animation team - the directors are currently booked for Sony's various Spider-Man: Into the Spider-Verse follow-ups - leaving us stuck with a creative team who churn out cynical, supermarket cartoons. At one point the DC animated universe was the go-to place for comic book histrionics and fluid action cracks. Now we're lumbered with an assembly line producing bumbling, misshapen features, each vid spiked with enough light swearing and pooling blood to avoid babysitter video classifications. Never mind that these additions often register as a creep's idea of maturity. Fatal Five's fight sequences (one moment of axe-meets-Lantern-ring excepted) are cumbersome and under-animated too. Rigid, plastic looking figures collide in a flat, centre space; world-shaking brawls executed with a clod's idea of invention.
Posted by Chris Ready at 12:55:00