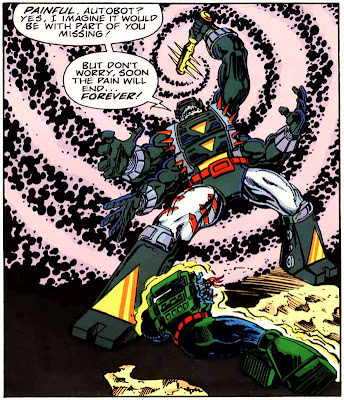 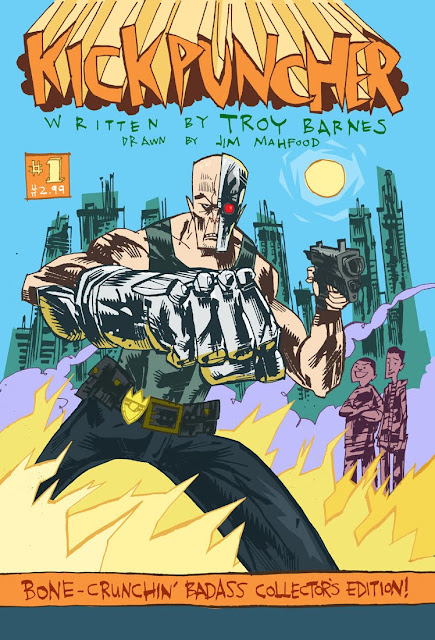 I COME IN PEACE!

Cersei Lannister hopped up on Cowboy Bebop drugs? Check. A horizontal Mega-City One with its own visual identity distinct from obvious vertical Blade Runner cops? Check. A Judge outfit that recalls Mick McMahon and Carlos Ezquerra's skinny inception draft, rather than the 90s big shoulders look? Check. Colour me hyped! Word is John Wagner had some level of script input / final say on this realisation of the Dredd mythos, fingers crossed that translates into brutal blunt zingers, and overt fascism. Dredd needs to be a bastard. That's what makes him distinct.
Posted by Chris Ready at 22:25:00 0 comments

Liam Neeson's back mangling Europeans in Taken 2. The principle appeal of the original Taken seemed to be seeing Neeson's softly spoken Dad demonstrating a lethal lack of patience with his daughters kidnappers. Sure, in the opening minutes he was talking some shit and going through action motions, but by the end he was brutalising dinner party acquaintances and braining men with only vague links to his enemies.

My memory may be muddled on this, but I distinctly remember a scene in which Neeson stumbled across a chauffeur minding the big bad's car and, rather than sneak past him, Neeson (I keep saying Neeson because who gives a shit what his character is called) grabbed the guy's head and bounced it off the vehicle before teasing the car door open just far enough to slide the concussed chauffeur's head in and mush it. I loved this scene because I have no memory of this guy being a credible threat to Neeson. I don't remember there being any form of weapon set-up at all. I'm not even 100% sure he was even meant to be the baddy's driver.  He was just some chap unlucky enough to be in Neeson's eye-line at the exact moment he stopped giving any fucks what-so-ever. Thankfully, this looks no different.
Posted by Chris Ready at 22:07:00 0 comments 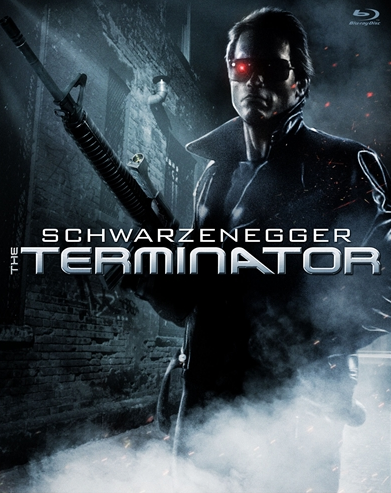 Play's exclusive steelbook cover for the umpteenth reissue of The Terminator (my fav film). I particularly like how some bright spark has cobbled together some strange composite gun in lieu of the AR-18 Schwarzenegger actually packs. That after market sight dumped on top is particularly odd. Although in reality it's just some shonky photoshopping, it kind of reminds me of era Italian posters - they always featured off model collage weapons. This mint is rumoured to include the Lowry Digital 2K scan MGM ponied up for a few years back. Hopefully we can expect the original Mono soundtrack too, and if wishes come true, a Jim Cameron commentary.
Posted by Chris Ready at 16:52:00 0 comments

A Song of Ice and Fire by Andrew Hou 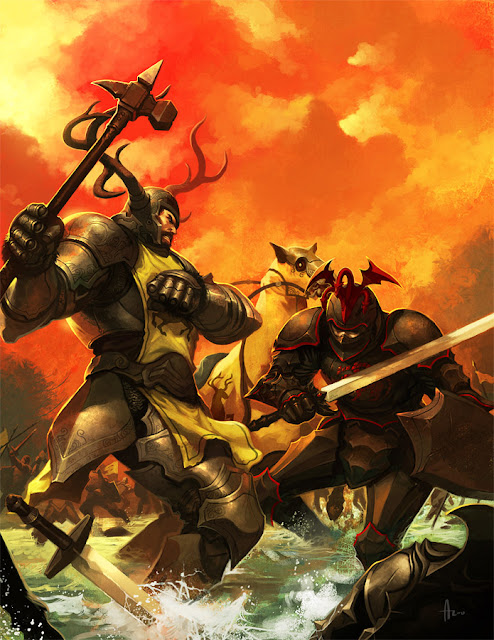 Email ThisBlogThis!Share to TwitterShare to FacebookShare to Pinterest
Labels: A Song of Ice and Fire, Andrew Hou

Email ThisBlogThis!Share to TwitterShare to FacebookShare to Pinterest
Labels: music, The Human League 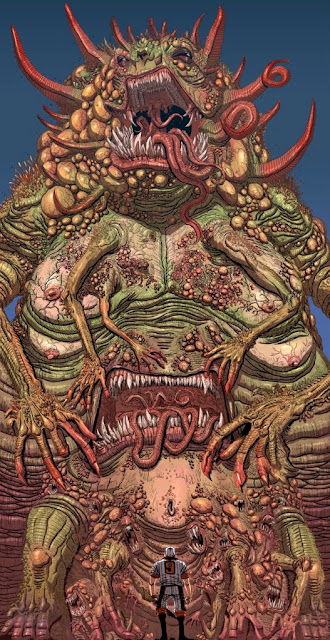 Email ThisBlogThis!Share to TwitterShare to FacebookShare to Pinterest
Labels: PIZZA 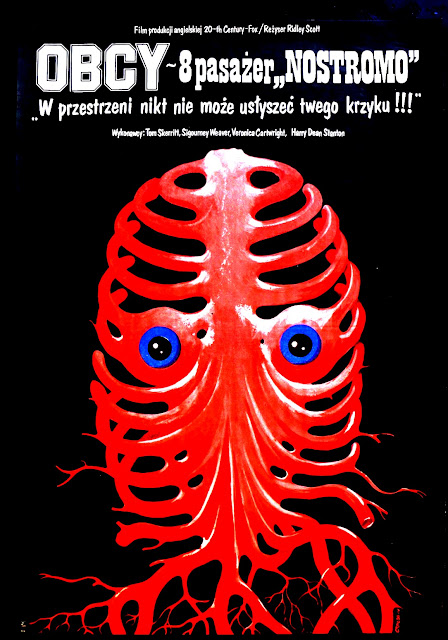 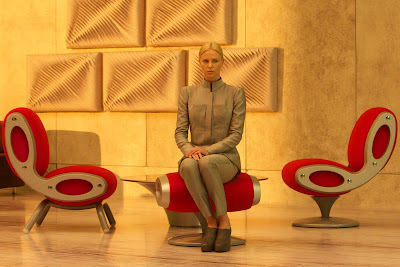 Conceptually, Prometheus is pretty wonderful. The lead dick of the Alien franchise's evil corporation hustles together an elite team of scientists to investigate a series of prehistoric cave paintings that point off into the heavens. After a couple of years of hyper-sleep, the team finds a planet spotted with unused Alien concept art, and a progenitor race of marble headed scumbags. Prometheus proposes a scenario equal parts Erich von Däniken's Chariots of the Gods?, and Yoshiki Takaya's Bio Booster Armor Guyver - humanity as an experimental building block in a chain of biomechanical monstrosities. It's an enticing proposition that organically feeds into the lifecycle shock established by Ridley Scott's last trip to the stars; unfortunately this slither of excellence is buried in mulch.

Prometheus had a well documented dance with the American ratings board, pinballing back and forth between PG-13 and R certificates. With ratings, there's the idea that the difference between them is minor, amounting to little more than dressing. PG-13 affords you one 'fuck' and some bloodless pounding. Score an R and you can have as much unsexualised mafia swearing as you like, with a glut of dismemberment to match. This is wrong. Ratings damage at the conceptual stage, affecting tone and even structure. Despite the certificate Prometheus ended up with, it is clear that the film began life as a kid friendly summer blockbuster. This isn't a film for adults. The mechanics are much too insulting. The characters, despite their apparently world beating scientific credentials, are buffoons. How else to explain a biologist who blanks the skull of an alien astronaut to run around like a headless chicken in the dark? With two members of his crew stranded in an inhospitable, murder pyramid, how might you expect the ship's captain to react when he gets a lifeform reading in their neighbourhood? Why, he'd laugh and slink off to boff the nearest blonde of course. These aren't world class brains struggling through an existential horror, they're teenagers inclined to froth until the danger becomes explicit. It's interstellar exploration as a drunken Friday night in the park.

Despite Scott's rambling about DNA shares, Prometheus doesn't remotely resemble Alien. That film posited a fairly believable situation in which a gang of space truckers utterly failed to cope with first contact. The crew argued, fought, and whimpered in the face of the insectile rapist that haunted their ship. The staff of the Prometheus are numb by comparison. No-one bothers to follow up an episode in which one of the crew hijacks an executive surgery pod to abort her squid offspring. The doctors she beats senseless in the process don't even blink when she rocks up two scenes later clutching her gut - they're too busy nursing a wildly unexpected plot development back to health. Everything in Prometheus is weightless. Rather than track one accidental infection and how it impacts a close-knit group, the film juggles several, playing them like aces when they suspect the attention of their childish audience is starting to drift. There's no sense of tension or claustrophobia, just witless downtime while we await the next creature attack or unheralded twist. Prometheus is a fumble. The unknowable, fossilised horrors of Alien repackaged as dull, meandering murderers in a film ordered like a Friday the 13th kill flick; sequel stings strung haphazardly throughout the credits.
Posted by Chris Ready at 15:12:00 1 comments

The Walking Dead #100 by Charlie Adlard 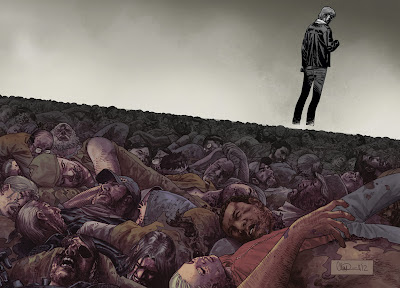 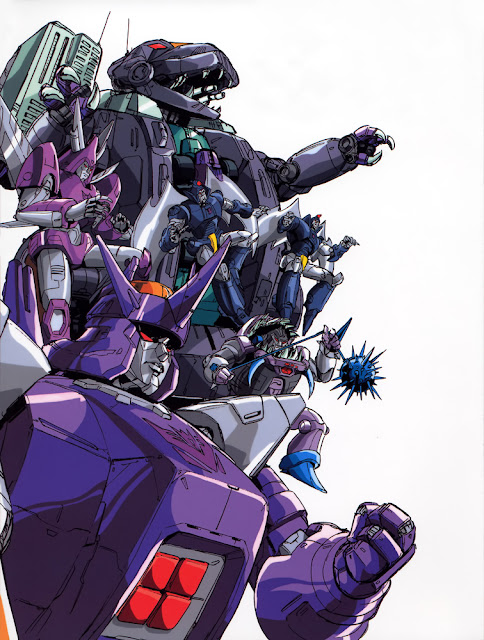