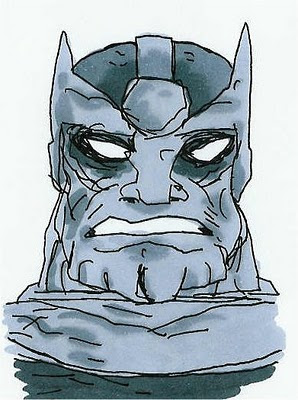 Jim Starlin's disco coloured Darkseid knock-off first appeared in 1973's Iron Man #55. Since then he's gone on to cause lots of cosmic trouble, including courting a female personification of Death by annihilating his own people, and putting the shoe in on numerous galactic pantheons. Thanos relaxes by being an underappreciated roster filler in Capcom's Marvel vs Capcom 2. Here he is in grey tones. I got a grey tone pen set.
Posted by Chris Ready at 15:35:00 0 comments

Disaster Year would like this to be good please. Transformers: War for Cybertron can easily trump the turgid movie cash-in interacts by remembering that the robot's state-to-state metamorphosis should be a sugar-high constant rather than a 'special' move. Mid-leap, mid-shoot, mid-anything, you should be able to stab at a button and change, rather than having to wait until the figure is grounded in some sort of boring stability. Constant transformation should be the order of the day. Write it on your whiteboards! War for Cybertron promises two campaigns - one for each faction. Unfortunately the Decepticon campaign seems to revolve around aeronautics snide Starscream, rather than mighty Megatron. Disaster Year's dream Transformers game would be a playable version of the life of this misunderstood folk hero, from his days as a ruthlessly efficient gladiatorial plaything, to his servile contract with a cosmic Satan, and attendant identity crisis. Transformers: Emperor of Destruction has a nice ring to it.
Posted by Chris Ready at 14:52:00 0 comments 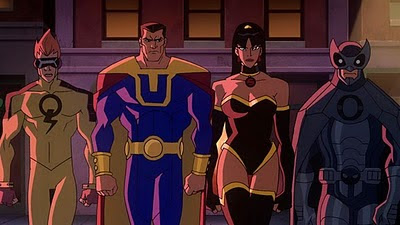 These first draft leftovers actually work in the feature's favour, they cue shorthand understanding by using such well established beats, lending currency to the central parallel worlds idea. These aren't quite our Justice League but we grasp the basics. As a main event bother, the Crime Syndicate shines. The mobbed up hierarchy works well for shortsighted in-fighting, allowing oodles of opportunity for crawling, cameo under-men. Gina Torres' Superwoman is the highlight, a willing accomplice to Owlman's psychotic agenda. She fights flanked by a bizarro Marvel Family, and suffers a kink for stranded super sleuths. Superwoman plays like an Amazonian mint of Thunderball's SPECTRE fox Fiona Volpe and, facing Wonder Woman, gets easily the best fight.
Posted by Chris Ready at 14:37:00 0 comments 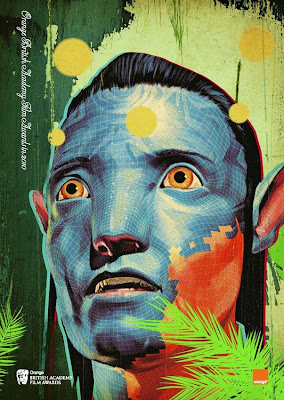 Commisioned by BAFTA to mark the feature's recent Best Film nomination. It's the Criterion Collection pop-cover Avatar will never get. Check the rest of the one-sheet nods here. They're all mustard.
Posted by Chris Ready at 22:46:00 0 comments

Announce trail for James Silva's latest, The Dishwasher: Vampire Smile. Vampire Smile is the sequel to last year's superplay surprise The Dishwasher: Dead Samurai; a title seething with monochrome blitzing, and crash-zoom reward prompts. It was like playing through a whole exercise book filled with lesson-waste violence doodles. Silva is a Disaster Year favourite, a one-man publishing house that regularly turns out minutely balanced slices of wonderful. Big things are expected. No pressure.
Posted by Chris Ready at 19:30:00 0 comments

"...the Japanese soldier, he has been at war since you were in fucking diapers."

Latest shill for Tom Hanks and Steven Spielberg's forthcoming HBO project, The Pacific. Don't let the music cues fool you, strip that soar and bugle and you've got nearly four minutes of bleak, dehumanising experience. As it should be. The Pacific theatre is nothing if not glare and misery.
Posted by Chris Ready at 19:41:00 1 comments 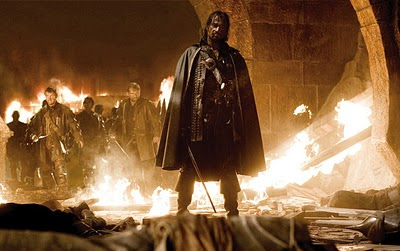 Quite apart from Robert E Howard's pulp adventures, there's mileage in this version of Solomon Kane. He's an uncaring, incompetent leader that rushes brashly into battle; a whirlwind of blades and hate that eviscerates everything in his path. He's also a mopey depressive with a martyr complex. Unfortunately there doesn't seem to be much interest in exploring any of that. Instead this adaptation is an endless, anecdotal trudge through rain-lashed England, briefly enlivened by the threat of an entertaining swordfight. Threat mind you. Actual combat in Kane breaks down to the airless slow motion sweeps and quick cut hiding typical of incompetent action films. Michale J Bassett's Solomon Kane is free of interest snagging incident, a big screen blow-up that takes with awkward continuity burps but doesn't repay with any nasty.
Posted by Chris Ready at 13:33:00 0 comments 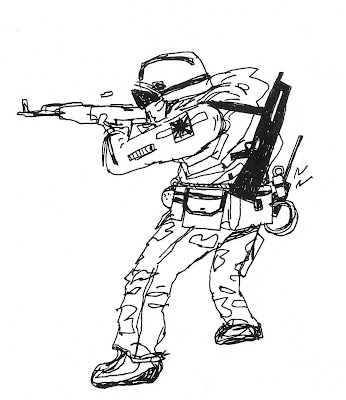 After seven or so days of multiplayer playtime, I finally managed to score myself a Tactical Nuke on Modern Warfare 2. In commemoration of this non-event, I commissioned myself to scratch out a pic of my scrappy SALT scuppering shitkicker. That's him there, all huddled and stressed. Loadout was a naked AK-47, an AA-12 that never got a look-in once the streak started, and Semtex for sticks. Perks rolled Sleight of Hand, Stopping Power and Ninja for sneaks. All Pro. Streaks hopped from Harrier to Chopper Gunner to Airburster. All credit to Mikhail Kalashnikov. Couldn't have done it without you.
Posted by Chris Ready at 12:49:00 0 comments

"Who's ready for Ken's dream tour?"

International trail for future Academy Award winner Toy Story 3. Looks like Andy's toys have to cope with a sinister discarded playthings Illuminati; that chuckling Masters of the Universe reject looks like he could really start some shit. Background fans! Look out for the Totoro cameo.
Posted by Chris Ready at 22:48:00 0 comments 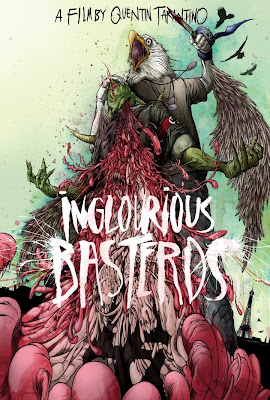 From The Lost Art of Inglourious Basterds. More here.
Posted by Chris Ready at 17:10:00 0 comments 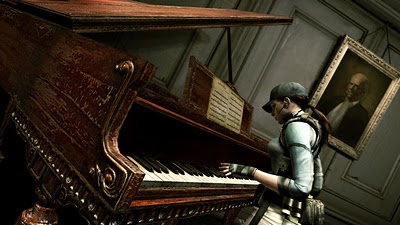 As well as being, at best, racial insensitive, Resident Evil 5 took substantial critical knocks for piling on action at the expense of suspense. Capcom responds with this second slice of DLC. Lost in Nightmares strands STARS stalwarts Jill Valentine and Chris Redfield in a déjá vu Spencer Mansion, brimming with crank traps and deathless pursuit terrors. Action beats are in the minority and armaments are limited or lost; Nightmares trades instead on co-op fleeing. Enemies are likewise limited to anchor dragging mutations and a bullying obstacle Boss, leaving players feeling distinctly underpowered. Nightmares has been enthusiastically received by fans pining for a return to the series' survival-horror roots. The more optimistic hoping that this renewed emphasis on player fragility can provide a play model for the inevitable Resident Evil 6. While it's encouraging to see puzzles woven back into the form, especially those that rely on specific roles for each player, bullet sponge clods with one-hit death attacks feel dismissive and anachronistic. Lost in Nightmares is a short, punchy addition to Resident Evil 5. It's the backfooting downtime the main game never managed.
Posted by Chris Ready at 15:38:00 0 comments

The Beatles - Two of Us

Embed jingle for Neil Marshall's upcoming Centurion. Shill stresses savagery and camaraderie, two qualities key to Marshall's work. A brief hint of personal dissatisfaction: I would very much have liked to seen a film simply about a campaigning legion, rather than getting muddled with solo striving and surviving. I don't think any action arcing is necessary, you could simply build a film around the mentality and mechanics of such a unit, with a defeat as your cap. Something for the screen as ruthlessly researched and plotted as Warren Ellis and Raulo Cáceres' Crécy comic being the ideal. Never mind that though, Marshall's offering up McNutty vs rampaging, mute Picts! It'd be rude to refuse.
Posted by Chris Ready at 20:42:00 0 comments

The Entertainment Capital of the Wasteland

Tease for Obsidian Entertainment's Fallout 3 follow-up, Fallout: New Vegas. Looks like Nevada's favourite night-out dodged a Chinese warhead. Due Autumn, New Vegas simply has to re-skin Fallout 3's morality muddles to get me on board. Vegas as a wasteland sin beacon has mileage; hopefully the developers have happened upon Pat Mills and Mike McMahon's pertinent portions of Judge Dredd: The Cursed Earth. They imagined Vegas as a nihilistic total bet, run by mutated mobsters with a taste for tank battling. Some of that please.
Posted by Chris Ready at 13:02:00 1 comments 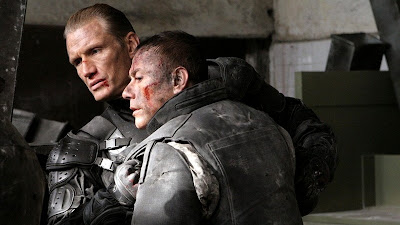 Like Rambo, or even The Wrestler, Regeneration distils the appeal of its lead down to one idea, then ruthlessly delivers on it. Here, Van Damme is simply an efficient killing machine. No effort is expended to create any recognisable human traits or feelings for Van Damme's Luc Deveraux. The absence of character, is the character. This imposed limitation eliminates the need for any motivational downtime, as well as organically strengthening the hijacked man conceit. Deveraux isn't human anymore. He's a reanimated corpse, programmed to harm. Why should he have any drives other than his orders? In domestic scenes Van Damme is a numb. Drugged up and placed in the field, he's a career best murderer, effortlessly driving long, prowling flashes of predatory knife play. Universal Soldier: Regeneration isn't about anything other than a group of emotionless machine-men beating each other to death in a utilitarian ruin. Quite right too.
Posted by Chris Ready at 13:34:00 0 comments