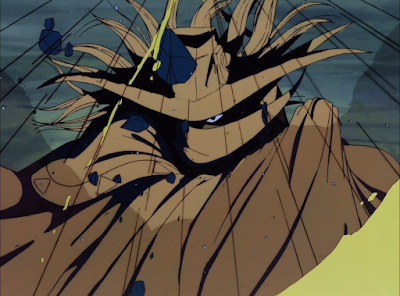 Ten thousand years into the future, mankind shivers in ramshackle slums while the world's nobility - undying vampires - lord it up in massive, mechanical castles. The landscape of the hereafter is ruin; buildings sag and decay, accented with scrounged-out zap technology. The toppled skyscrapers of the pre-apocalyptic age have fossilised, now only sand-blasted rectangles with the faintest hint of windows. Livestock survive, encircled by electronic perimeter fences that sometimes manage to fend off the carnivorous clouds that settle into the herd, turning their prey into gravity defying soup. Our hero is the travelling swordsman D, a half-human, half-vampire known to his fellow bloodsuckers by the (presumably) racist invective Dhampir.

Better looking in repose - the OVA's animated fights basically boil down to sweeping lunges and telekinetic bludgeoning - Toyoo Ashida's Vampire Hunter D is an otherwise dynamically drafted adaptation of Hideyuki Kikuchi and Yoshitaka Amano's light novel series. Amano's delicate, porcelain people are rendered here as spiky and determined, weighed down by the heavy, oily paints that chart their figures. D towers like a goth Clint Eastwood; the women he encounters are cherubic. The video (explicitly designed to appeal to teenagers relaxing between study shifts) boils over with creeping monstrosities and their macabre magick. A particular highlight is the entrance-cum-drainage pipe that the title character uses to enter the castle of the evil Count Magnus Lee. Every surface in this makeshift gaol seethes with spluttering, decaying life - the variety of these oozing, occult figures rivalling that seen grumbling beneath the mood lighting of Star Wars' Mos Eisley Cantina.
Posted by Chris Ready at 12:05:00