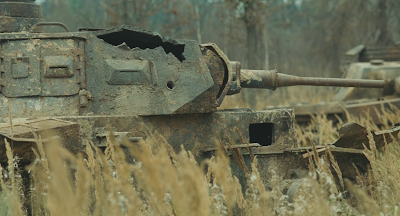 The few Russian war films that I've seen haven't been particularly interested in presenting their Great Patriotic War as a boy's own duck hunt. Instead they seem more inclined to address it as dour, psychological state imposed on them by outside forces. White Tiger is no exception. The film tracks the response to a ghostly Tiger tank that appears out of nowhere to wreck havoc with the Soviet advance on Berlin. The titular Nazi phantom specifically creates its own cosmic opposite when it ambushes a Russian tank column. A nameless man is pulled from the wreckage of his vehicle covered in third-degree burns. He recovers at a supernatural rate, then is placed in a special forces unit tasked with hunting down the mysterious tank.

In many respects, White Tiger is shot like a monster movie. When engaged in battle the feature tanks churn up the earth beneath them and expel massive, guttural clouds of smoke. They crash through buildings and splinter trees like they are nothing. Each tank is also given a personality. The Nazi tank is framed as an opportunist predator, taken to stalking through thick bush to ambush its prey. Like its namesake, it is also able to move around soundlessly with a stated preference for attacking from the rear. The Tiger is presented as the clear aggressor, while the nameless man's heavily customised T-34 gets to be harassed and heroic. The Soviet tank is shot in ways that accentuate its robust, rounded body. Angles are low and intimate, where the Tiger is kept at arms length. As the film progresses it becomes increasingly metaphysical with each machine representing deathless, nationalist symbols of war. Although the story doesn't quite keep up with these developments, the mise en scene has long since keyed us into these ideas.
Posted by Chris Ready at 19:15:00