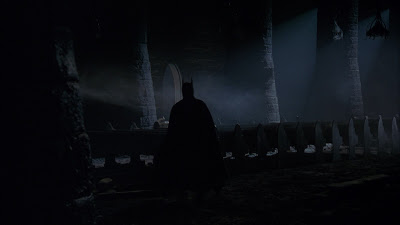 A hysterical, nightmarish version of the Dark Knight. Tim Burton's film is a violent and macabre comedy, blessed with an insistent, thundering score by Danny Elfman. Michael Keaton plays Batman as the typical Burton hero - isolated and childish, but with an inkling of sweetness. Kim Basinger's Vicki Vale is an overbearing stalker one minute, a pedestal blonde the next. They are a dreadfully mismatched couple, Wayne seeking her simply because she is desirable. She is a trophy to him, to be coveted and fought over. In terms of brain space, Wayne seems far more interested in the enemy he creates. Jack Nicholson's Joker is terrifying, a cruel mobster transformed into a flippant libertine. His violence manifesting as an avant garde experiment.

This Batman is an aggressive but awkward phantom with zero moral underpinning. Indeed, the end clash is more like the meeting of two rather nasty bullies than a heroic triumph. Batman physically and verbally pounds his adversary, obviously quite enjoying it. Wayne is distant and possibly even mentally unhinged. A leaf through Jack Napier's crime file is capped by a dreamy flashback in which Wayne recalls a version of his parents' murder. The sequence has a needling sense of manipulation to it and, perhaps, even self-justification. This may not even be Bruce's actual memory, just ammunition to get the job done. Not afraid to examine the superhero psyche as damaged rather than courageous, Burton's film is pretty subversive for a summer money machine. Miraculously, Burton even out-does himself with his kinky sequel Batman Returns.

Extracted, edited and expanded from this piece.
Posted by Chris Ready at 14:50:00