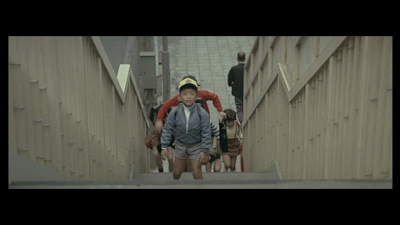 Conceptually, All Monsters Attack is unique. Instead of being a typical in-universe Godzilla film, it's set in our world and focuses on the series' audience. It's a Children's Film Foundation version of social realism, focusing on the plight of lonely, latchkey children. Considering Ishiro Honda's taste for grounding his work in issues stripped from the headlines, I wonder how much of the film represents his own particular tastes? Destroy All Monsters, ended with a note of finality, so it's tempting to see this film as a stepping stone for the director. Perhaps he'd had enough of giant monsters?

All Monsters Attack works best in its early passages, detailing the environment young Ichiro is forced to grow up in. This Tokyo is completely unlike the space-age metropolis seen in other sci-fi slanted Honda films, it's dense with machinery and completely polluted. Ichiro's world is basic and functional, strewn with derelict buildings and people. His parents love him, but their blue collar jobs demand they spend all their time away from him. When not running from local hoodlums, Ichiro spends his days plonked in front of a home made computer dreaming of Godzilla and Monster Island.

This is where the film come unstuck - the kaiju footage is primarily recycled sequences from the two rubbish Jun Fukuda sequels. Entire battles are played out in full, boring detail, laced with lame cut-aways of Ichiro and a human sized Minilla cheering the super parent on. The only new, suit action addition to the film is Gabara, an ugly reptilian cat monster that represents the hardships Ichiro must endure. Experimental, but hopelessly padded, All Monsters Attack is notable for having one of the least patronising messages I've ever seen in a kid's film: self reliance and an unshakable personal identity is more important than simply being 'good'.
Posted by Chris Ready at 15:49:00