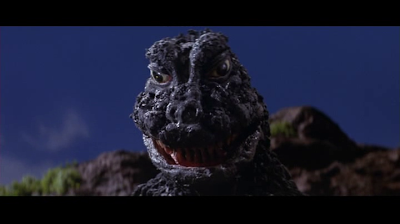 Who is Godzilla? What drives him? The eighth film in the series peels back his calloused radioactive hide to reveal a brusk but ultimately attentive father. Brought to Sollgel Island by the distressed brain waves of an embryonic offspring, Godzilla arrives just after a radioactive storm has mutated the local arthropod population up to convenient grappling height. Son of Godzilla's big idea is a monster ecosystem, with Godzilla and his son sitting on top of the food chain.

The film's human characters, a science team, a reporter and a shipwrecked girl, can do little other than hide in caves and hope they don't attract the titanic predators. When not clobbering praying mantis puppets, Godzilla spends his time mildly irritated by his infant son Minilla. He resents the child's dependency and inability to conjure up his own atomic breath. It's easy to side with Godzilla. Minilla is an ugly little troll, his face forever frozen in a state of dull alarm. The film at least seems to understand this reservation - hurled boulders are never far from the child's face.
Posted by Chris Ready at 14:08:00