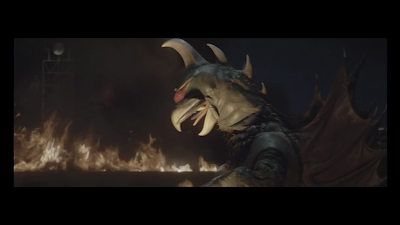 Godzilla vs Gigan would've been significantly more exciting if I hadn't spent the last couple of weeks marathoning my way through the Big G's adventures. Without a fresh knowledge of the other films in the series I might not have noticed the sheer volume of recycled footage used to prop up a slight entry primarily concerned with the plight of an unemployable mangaka. Godzilla vs Gigan is a chimeric mess, full of mismatched footage and ideas on loan from better films. There isn't even much consistency between the repurposed shots and Jun Fukuda's newly crafted footage.

When King Ghidorah and Gigan arrive at the 45 minute mark to put an alien peace plan into motion - that's harmony through eradication rather than something wishy-washy like an infinite clean energy resource - the film starts cutting wildly between two completely distinct flavours of apocalypse. The King Ghidorah scenes, lifted from Ghidorah, the Three-Headed Monster, are set during the day and centre on the concrete shattering demolition typical of the Ishiro Honda and Eiji Tsuburaya instalments. Although spectacular, the destruction has a detached, horrifying weight to it, born as it is from a hovering monster that can spit lightning at will. This disconnection essential for a directorial team who never celebrated the annihilation they depicted.

Gigan's inserts are completely different, perhaps symptomatic of a creature that can't touch anything without slashing at it. The cyborg knife-bot hurls itself around an industrial sea front, hacking away at buildings while framed by flames and inky, polluted smoke. Despite the fact that these concurrent sequences are shown to take place at completely different times of day, a generous soul might contextualise this disparity as Fukuda matching the violence to each character's personality. Like his 1970s stablemate Hedorah, Gigan is an aggressive techno-nightmare intent on harm. His nighttime tantrum certainly helps to sell the unrestrained, childish glee the monster feels levelling cities, but it ends up giving the film a garbled voice. Gigan's cruelty mixes poorly with the horror of Honda's images.

Ostensibly designed to babysit children, Fukuda still can't resist trying to one-up the harsher spots Yoshimitsu Banno and Teruyoshi Nakano introduced in the previous film - Gigan's attacks on Godzilla and Anguirus feature the kind of arterial blood spurts usually associated with samurai fight flicks. Alarming, but ultimately perfunctory, these attention grabbers are just another inconsistency in a film that can't settle on a distinct tone. Godzilla vs Gigan isn't out-and-out terrible, the introduction of a kaiju that looks like a cross between a chicken and a chainsaw held my attention, however it is exactly the kind of the film people describe when sneering at tokusatsu cinema. It's cheap, artistically primitive, and grinds to a halt anytime a human being is forced in front of the camera.
Posted by Chris Ready at 18:27:00