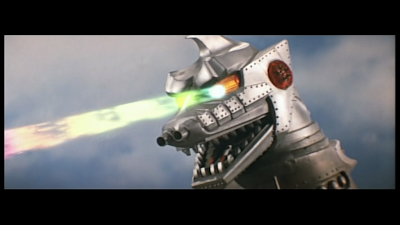 Godzilla vs Mechagodzilla is exactly the kind of trash cinema gem I always hoped Jun Fukuda was capable of. The mid-60s juggle between Ishiro Honda and Fukuda gave the Godzilla series a kind of split personality. Honda was always much more focused on telling human stories, with the Toho kaiju as walking natural disasters. Fukuda is the opposite. His human stories are threadbare, with character and drama expressed through the monster battles. During Fukuda's run Godzilla and pals began communicating through speech bubbles and baseball hand signals, coordinating their attacks on the latest alien invader. Unfortunately, Fukuda came to the franchise when it was on the wane. His apparent interest in bloody monster battles undermined by budget cuts and the obvious use of stock footage.

Mehcagodzilla is completely different. Fukuda builds on the simple dynamics he displayed in Godzilla vs Megalon, freeing the camera up with the kind of jittery hand-held work that gets people excited about Shigehiro Ozawa's Return of the Street Fighter (released the month following this film). Instead of bumbling big bro leads, we get scientists and archaeologists teaming up with Interpol agents to battle Intergalactic gorillas who act with the louche detachment of Yakuza. These Planet of the Apes escapees have built themselves a cyborg Godzilla, complete with synthetic flesh and a shrieking roar. This false King rampages across Japan causing the kind of carnage his namesake used to before he suffered a childish face turn. This allows Mechagodzilla to have it both ways. The film can have hero and villain Godzillas, the audience allowed to both delight in the havoc and be assured it will, eventually, stop.

When the two Godzillas first meet it is in the smoke choked industrial arena of Yoshimitsu Banno - the Godzilla vs Hedorah director's indelibly apocalyptic idea of kaiju combat slowly transforming into the rule, rather than the exception. Fukuda also works hard to unite the usually disparate human and monster worlds. Following Honda's departure the mismatch between the two plains of existence became more pronounced, doubly so when you factor in creature effects on loan from completely different creative teams. Fukuda uses rear projection screens and firebars to stress the devastating reality of being near two rampaging titans. Tiny humans are also superimposed into scale environments, creating a consistent sense of space. Well paced and full of pulpy violence, Godzilla vs Mechagodzilla feels like a complete film experience, rather than a sugar-hyped child flicking between TV stations.
Posted by Chris Ready at 12:46:00