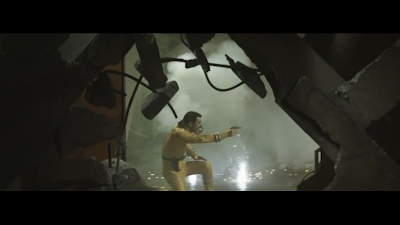 Ishiro Honda returns to the Godzilla fold with Destroy All Monsters, a wonderfully plastic pulp adventure in the vein of Invasion of Astro-Monster. It is the year 1999, mankind enjoys daily rocket missions to the Moon, safe in the knowledge that Earth's monsters have been confined to an archipelago named Monsterland. When communications with the island's control centre are suddenly severed, intergalactic badass Captain Katsuo Yamabe (Akira Kubo) is sent to investigate. He soon discovers that Monsterland's science team has been brainwashed and the kaiju are now under alien control.Unlike the sustained mash the title would seem to suggest, Destroy All Monsters revolves around Captain Yamabe's efforts to put a hurt on the silicon-based punks who have designs on Earth.

Yamabe is all action. He jets about the cosmos in the Moonlight SY-3, a chromed space rocket that'd make the Thunderbirds jealous. Similarly, when he discovers his girlfriend has been mind zapped by the covetous aliens he immediately attacks her in front of a crowd of UN delegates, tearing a pair of hypnotic metal studs out of her ears. This no-nonsense approach to storytelling is everywhere in the film. Contrary to the previous two Jun Fukuda films, these creatures are not simply capering merchandise. Honda, it seems, prefers to continue presenting them as amoral Old Gods, blind to humanity's suffering. In the all-action finale Godzilla and pals don't turn against the alien Kilaaks to make amends for their unbridled destruction of Earth's cities. They do it because mankind has simply managed to seize control of the alien devices that had been directing them. Honda clearly doesn't see the Big G as the pop culture hero that Toho were trying to push. The King of Monsters will always be the living embodiment of atomic indifference to him.
Posted by Chris Ready at 15:55:00