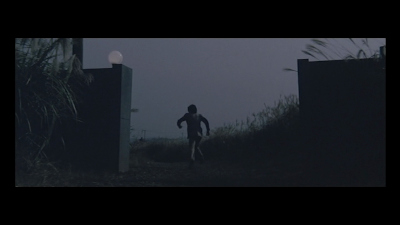 Stock footage overload! After thirty minutes of reasonably diverting espionage, Godzilla vs Megalon goes bananas, cuing up the armed response footage used to welcome a rampaging Gigan in the previous film. It wasn't even new then. This will be (at least) the third time we've seen the massing techno-tanks on loan from Destroy All Monsters. I've lost count. War of the Gargantuas' maser batteries get another showing too, last seen putting the boot in on friendly kaiju Anguirus in Godzilla vs Gigan. It's one thing to feel like you're seeing similar beats replayed, but quite another to be literally watching the exact same piece of footage being replayed over and over.

This salvage operation hits a new low during a jet fighter attack on an out-of-control Megalon - the creature swings his distinctive drill fists at the buzzing aircraft but connects, in close-up, with Gigan's curved scythe hands. It's a shame as Megalon is Jun Fukuda's most consistent work since Son of Godzilla. The central conceit of a young boy, his two Dads (the very best of friends, no doubt) and their pet robot at war with subterranean Swedish breeze blocks is at least novel. Fukuda also stages one or two amusing car stunts between all the collages. It's as if the director has had a big fizzy drink and remembered that people often look exciting when filmed in motion and from strange angles. Megalon is in no way competent, but certainly a step up from the anti-adventure seen in the Gigan entry.
Posted by Chris Ready at 17:57:00