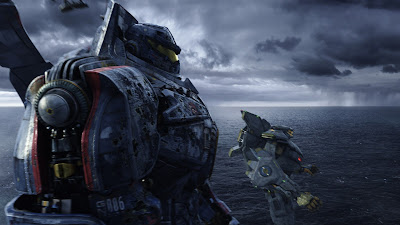 Guillermo del Toro is a tinkerer, a writer-director obsessed with how things work on an impulse level. His body of work is a kind of rolling genre thesis, with del Toro approaching each film as a well worn conceit, breaking it down to see what he can add and subtract without the whole losing shape. Cronos gave vampires shame, Blade II offered a leather jacket ubermensch a string of equals, while the Hellboy films grounded group superheroics in the disaffected camaraderie of a circus troupe.

Pacific Rim takes a slightly different formal tact. Instead of character inflections, del Toro and Travis Beacham provide monster movies with the kind of socio-political context and permanence usually seen in the war films of the 1950s and 60s. Films less concerned with an overarching ideological thesis and more about moment-to-moment effects on the individual. Politically and economically the world of Pacific Rim is crippled. The world's leaders have given up engaging with the Kaiju invasion, preferring to hide behind massive concrete walls. As far as employment goes the only legal game in town seems to be heavy industry, to be paid in microwave meals. The sole people making money are a criminal class that sweep in and strip mine monsters the second they fall. Mankind is locked into an extinction war and running on dregs.

Of course, this isn't the totality of the Pacific Rim experience. The majority of the film is a quarterback narrative sprinkled with city levelling fisticuffs, but the total war idea informs the film's heft and movement. Pacific Rim is just a little bit more desperate than your average alien invasion film. Its characters that little bit more likely to die without fanfare. Humanity has spent years getting hammered and, aside from the indomitable Idris Elba and his ace Jaeger pilots, getting comfortable with the idea of defeat. Pacific Rim is then Godzilla by way of Battle of Britain. Ishiro Honda's patented kaiju eiga mission movie grounded in blitz think and finite resources. Del Toro might be holding back - fights peak at a delirious mid-point and the Kaiju could do with wilder colour palettes and more individual voices - but Pacific Rim is a blockbuster that proceeds from one specific, cultivated idea rather than a thousand clashing trailer images.
Posted by Chris Ready at 22:46:00