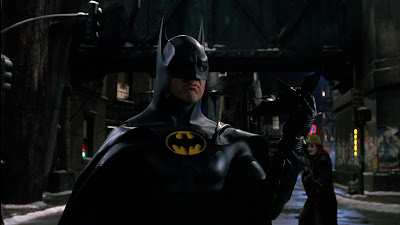 Second time round, Tim Burton succeeds by simply not trying to please anyone but himself. Batman Returns is Burton's kitsch Christmas aesthetic amped up into infinity. Everything is overbearing, enormous and expressionistic. Returns' locations have nothing in common with reality, the universe apparently existing within a massive snow globe.

Michael Keaton barely shows his face for much of the first hour. He's a background spectre, filed away whilst we are treated to the canon diverging origins of the various super-villains. Rather than undermine the character it gives him a mythic, supernatural quality. We first see him alone, bathed in the Bat-Signal, slumbering in his Gothic castle-mansion. Returns' Batman is a vampire justice-god, sleeping deep in his ancient fortress until he is needed. It's a significant and welcome step up from the confused thug of the first film. His tenuous relationship with the Gotham police and his casual use of deadly force also lend him an air of absolute danger.

Danny DeVito's Penguin is a vile, ooze slobbering deformity, lousy with amoral circus muscle. Like the Joker, this villainous character is the splintered reflection of a hero trait - Bruce Wayne's loss taken hideous, violent shape. Indeed Wayne initially feels pity for him, hoping Penguin can achieve the kind of parental stability denied to himself. Catwoman is often the female opposite of Batman, equally skilled and of a similar intelligence. In Returns she is also driven by the need for vengeance. Michelle Phieffer's damaged counterpart is a much better fit for this Batman than the Vicki Vale cypher - Catwoman already shares his kink for dressing up and lashing out. She can also look after herself.

These two comic book villains are fuelled by slights, seeking validation. The real evil then is Christopher Walken's Max Schrek. His primary motivating factor is nothing but greed. He doesn't need an emotional equalizer. Walken plays him with panache, a shark in a suit. He's pale and unmoving, a dead eyed seeker constantly looking for leverage. Shot through with pain, loss, and bad decisions, Batman Returns is a beautiful, romantic take on the Dark Knight Detective.

Extracted, edited and expanded from this piece.
Posted by Chris Ready at 17:28:00