Godzilla vs the Sea Monster / Ebirah, Horror of the Deep 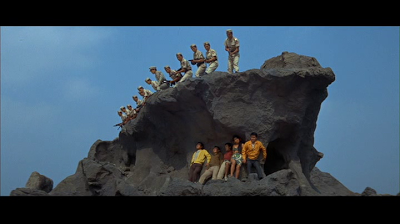 Jun Fukuda's first stab at Godzilla is a minor effort, notable for a teeny bop plot that resembles an easy breezy Elvis movie. When country bumpkin Ryota hears his brother has been lost at sea he commandeers a Hollywood producer's sail boat to go in search of him, bringing along two bickering sock hoppers and a laconic safe-cracker. After a run in with Ebirah, a monstrously proportioned lobster, the gang wash up on an island controlled by the Red Bamboo, an evil criminal organisation who command a nuclear option. Whilst planning their escape the gang run into Dayo, an Infant Island native who has been kidnapped to toil for the terrorists. Unable to contact Mothra, the kids must make do with a drowsy Godzilla.

Bright and colourful, but ultimately dull, Ebirah, Horror of the Deep marks the point were Godzilla ceased to be a state-of-the-art techno terror. Although embellished with the usual ecological undertones, Fukuda's film appears designed to appeal specifically to children - the main character is a manic teen out to rescue his big bro,while kaiju scenes pinball back and forth between playground scuffling and some alarming mutilation. Godzilla's enemies are a disinteresting bunch too. Instead of prehistoric titans resurrected for the atomic age we're stuck with a boring crustacean and an oversized condor. Akira Ifukube's monster march is also gone, replaced by antwacky surf rock. Following on from three consistently excellent Ishiro Honda entries, Fukuda's film can't help but disappoint. What's surprising though is the faint whiff of contempt. Godzilla isn't presented as a terrifying destructive force, instead he's a silly dinosaur who dances to electric rockabilly while jets crash into him.
Posted by Chris Ready at 16:50:00