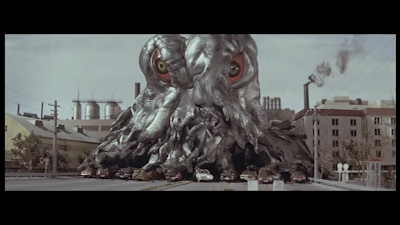 The first Godzilla film of the 1970s is a macabre, psychedelic freakout with the Big G matched against a sentient space contaminant who takes bong hits off heavy industry smokestacks. Yoshimitsu Banno's sole contribution (thus far, the writer-director has a producer credit on Legendary Pictures' upcoming remake) to the Godzilla franchise is a wildly atypical entry, structured like a fever dream. Non-diegetic comments and animated digressions bleed into the film, framing it as a kind of psychic explosion experienced by Ken, a young boy with a sixth sense style ability to track the monsters' movements and motivations.

As an aside, I wonder if Godzilla vs Hedorah is the Japanese monster movie Steven Spielberg pays lip service to when describing his pre-special effects disaster idea of Jaws? Hedorah's early aquatic mode is shot in much the same way - a pitch black shape that blocks out the sun from the ocean floor, and a speeding blur of surf-churning aggression when seen above the waves. The beat and tempo of an early diving scene is also a fair match for the chaotic hopelessness felt throughout Spielberg's career defining feature.

Godzilla vs Hedorah takes the usual perversions of science angle and adds in a kind of tie-dye animism, casting Godzilla as a titanic champion of the natural world. Cheered on by a Japanese youth movement, his enemy is a malevolent toxic sludge that seeks to choke the life out of everything it touches. More than a match for our hero, Hedorah is easily the most evil kaiju so far. The majority of the beasts featured in the Godzilla series are oblivious to their horrifying effect on mankind, Hedorah revels in it. He cackles as he crushes, transforming into a oozing bio-jet to spray acidic gas clouds on crowds of innocent people, melting them to the bone.

New special effects director Teruyoshi Nakano instantly asserts a distinct, terrifying vision for the ongoing series. Hedorah's fights with Godzilla are shot at night in smoky, pollution choked environments that emphasise the blacks on the cobalt grey monsters. Both creatures look fantastic - the smog hiding the usual sins associated with Godzilla's suit. Unlike the last few Ishiro Honda films, there is no underlining sense of optimism. Victory in Godzilla vs Hedorah is hard won, with thousands dead and Godzilla himself bloody and half blind. Yoshimitsu Banno bucks a ten film trend, making Godzilla a gasping underdog, overwhelmed by an enemy that resembles the oily, landscape sweeping waves of the Tohoku tsunami. Godzilla vs Hedorah is a queasy sense assault that can proudly sit alongside series greats like Godzilla and Invasion of Astro-Monster.
Posted by Chris Ready at 00:01:00