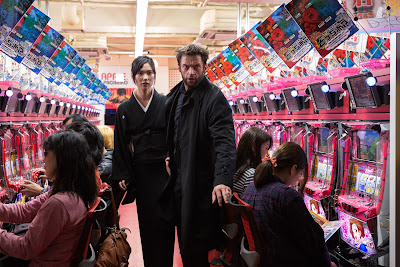 The regurgitation of notable comic book storylines continues with The Wolverine, a blunted retelling of Chris Claremont and Frank Miller's 1982 mini-series. Aside from the usual disgust associated with hundred million dollar movies that don't cut the original authors a credit, never mind a cheque, The Wolverine confuses and miscommunicates its own conceits. Aside from shipping Logan off to Japan, this sequel's big idea seemed to be pain, with our hero finding his healing factor nulled. In practice, the X-Man can still shrug off point-blank 10 gauge and keep swinging. A few beats of dizziness and the odd shot of pooling blood doesn't translate into a raising of stakes. Logan is still very obviously superhuman.

If anything Logan's newfound ability to be knocked unconscious seems more like a way to work basic location transitions into the story. Any time Logan collapses he's sure to wake up exactly where he needs to be. Damage, and any determination in spite of it, is a hard sell with a tween friendly rating. When Logan ends up prickled with arrows like Mifune in Throne of Blood the desperation is shrugged off. We're never given the space or detail to allow the image, or even idea, to pop. What should have been an indelible glimpse of an invincible beast-man struggling against the weight of many is instead a painless image juggle to take us into Wolverine's latest coma.

James Mangold betrays no particular interest in blockbuster histrionics, settler encounters are weak and uninvolving. The action highlight is an almost throw-away bout of bullet train surfing that manages to work in a Bondian contempt for the lives of heavies. Mangold is much more comfortable with a second act stretch that places Logan in rural Nagasaki, with distressed damsel Mariko in tow. Mariko grounds the mutant with basic lessons in decorum and civic duty, before allowing him to wander off to find the well he used to shelter her grandfather from a Plutonium bomb.

Mariko then steps in to recontextualises the hesitant Logan for a face-puncher finale. The post-coital waif sees him as something between a rock star and an animistic cave God. This starfucking further confuses Logan's bizarre romantic entanglements. He incessantly dreams of the crush he skewered, placing her in a white-out villa realm that has zero to do with any reality, or relationship, they actually shared. Logan only remembers to shag his mate's imperilled granddaughter when she makes it clear she adores him, all the while ignoring the cherry-red dervish who actually protects him. Rila Fukushima's Yukio has the thankless task of being an anime influenced little sis focus tested to get nerds drooling. It's strange that despite her obvious usefulness in a fight, the film treats Yukio in much the same way as Mariko's evil Dad - she's pigeonholed as a colourful toy to be used and discarded at whim. A slave caste stray who fights like hell for people who act all bummed out whenever she pops up.

Compared to Raleigh's tireless cheerleading of Mako in Pacific Rim, The Wolverine's gender politics are stunted and old fashioned. Why have an equal when you can nob a willowy little rich girl who reminds you of a woman who never returned your affection? The Wolverine is only truly interesting as an example of flux filmmaking. Despite the definitive article title, the film can't even match the shakey permanence of an in-continuity comic from the early 1980s. Everything hard won is discarded to limp a few steps closer to Bryan Singer's upcoming canon singularity.
Posted by Chris Ready at 21:38:00