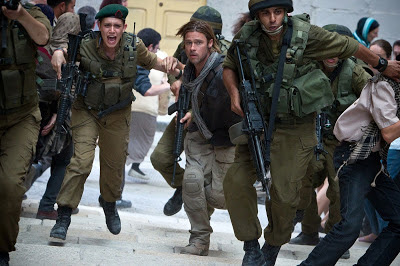 The main problem with World War Z is economic expectation. The film is saddled with a few too many tonal clashes, ideas and actions that fail to track organically and betray the indecisiveness of its production. Is it a horror film or an action film? World War Z spends its entire first act constructing a dire, fume life scenario, in which mankind must rapidly adapt to a mutation that turns people into heat-seeking missiles. This early action is sprinkled with the kind of on-the-fly thinking that made the Bourne series so enjoyable - here Jason's favourite lifestyle cudgel, the magazine, becomes homemade body armour. Unfortunately, the filmmakers can't leave the Bourne lifts in the details. After a helicopter rescue framed by grim necessity, Z begins to transform into a globetrotting spy flick with Brad Pitt's UN Inspector doggedly pursuing a screenwriting embed to make sense of the outbreak.

The hope that starts to trickle into the film plays by sci-fi blockbuster rules. It's a poor match to the post-28 Days Later studio horror we've already sat through forty minutes of. World War Z is a just little too keen to reach a place of stability, and in doing so torpedoes itself. Still, up against wrongheaded stinkers like Man of Steel, World War Z has much to recommend it. Although the shift to a global megaplot marks a kind of genre betrayal, it allows satirical, chaotic elements to bleed in. North Korea's solution to zombies is inspired, and at least one country appears to have resolved to go down in a blaze of suicidal, nuclear glory. The finale set on the outskirts of a slate town in Wales is a decent bit of conflict shrink too. After the insect swarm absurdity of the Israel section, it's fun to see Z returning to the prowling anti-action of its opening act. Why fill the screen with a million CG humans scrambling over each other when you can build second-to-second tension around Brad Pitt not being able to free his crowbar from the head he's just caved in?
Posted by Chris Ready at 13:23:00

Finally watched it last night. Spot on review! It's a decent film, the main frustration with it is that it had the potential to be great!

Did you read about the original ending and subplot with his wife? I'm not sure how they shot it but it all sounded a bit fucked up. I'd be very interested to see it but apparently they're not including it on the dvd/bluray.

Really? That's disappointing. I wanted to see that. Even in isolation, like on a deleted scene reel, it'd be fun to see Pitt scrambling zombie brains in Red Square. Any idea what the US unrated version adds then?