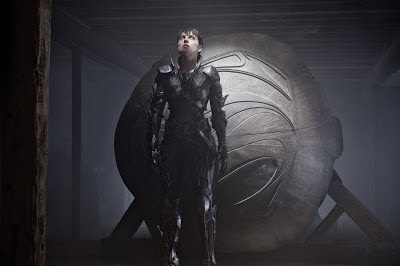 As a character conceived during the Great Depression you would think it notable, perhaps even timely, to reconsider Superman during a double-dip recession. The Golden Age Superman was a social equaliser, his early strips focused on kitchen sink scenarios in which the hero featured as an avatar for justice and basic human decency. In contrast Man of Steel presents Superman as a couch surfing millennial, an unactualised ditherer who uses his abilities in passive aggressive explosions.

David S Goyer attempts to recontextualise Superman as a lonely drifter scared to use his powers openly. This kind of indecision works for a character like Wolverine, a tainted hero with powers based on damage and people shredding violence. You can understand why Wolverine shuns situations that get his blood up. Transpose Superman into these scenarios though and he just plays as weak. The most powerful thing on the planet should not have a confidence issue, he doesn't need to refuse the call. It's disingenuous.

Human sympathy aligns with Superman when his problems are more broadly existential - his alien otherness, or his ability to match the ideals his fathers gift him. Keep him under a bridge while the man he loves most in the world is swept away and you make him seem cowardly. Include that event in a story where he never carries that pain forward into regret and you undermine your character and thesis. Man of Steel is not a carefully considered alternative take on the mythology of Superman, it's pop contrariness with zero follow through. Superman tweaked in ways antithetical to his appeal to track with a studio's idea of their target demographic.

After the thoroughly shitty Green Lantern, it's disappointing to see Warner Bros once again overlook the key thematic appeal of their most popular movie superhero. Being Batman is Bruce Wayne's drive. His indecision is wrapped up in the execution and his longevity rather than the initial leap. His agenda is unshakably to fight crime. In Batman Begins, Wayne travelled the globe to hone and temper his resolve. Man of Steel makes Clark's journey a surface level identity crisis, resolved through expositions dumps and lifeless talking heads written like essay bullet points.

The uselessness of this Clark Kent is especially apparent when compared to a character like Faora, General Zod's right-hand woman. Unlike Kal-El, and even a Zod prone to face creasing tantrums, Faora is centred and comfortable. She has instantly adapted to her new environment, able to channel her Kryptonian martial arts into a super fighting style heavily indebted to Dragon Ball Z. She's exactly the kind of ideological opposite this film needs. She can control her powers, but doesn't want to. Her movements are precise and directed where Kal and Zod are flailing. She's the strong, silent answer to Kal's repressed, pathetic impotence. Why did the filmmakers return to Zod when they could have built the film around the fascistic allure of a beautiful Kryptonian equal who acts like an Israeli commando? As a hook it beats the barely explored eugenics tension set up during this film's (admittedly fantastic) Heavy Metal Krypton prologue.

The real tragedy of Man of Steel is that, like Prometheus, the film is stuffed full of interesting design work made rootless by an indifferent script. The Krypton sequence is Moebius' Arzach escaping from Alejandro Jodorowsky and Juan Gimenez's Metabarons. Zod and his men are outfitted with Giger muscle suits that look like they've been carved out of prehistoric bones. Each action sequence has a distinct identity and genre through-line.The first act featuring a slugger Jor-El is basically the action heavy first episode of Bruce Timm's Superman: The Animated Series by way of Dune. A small town throw-down is blocked like an Akira Toriyama fight comic, and the Metropolis toppling finale has visual flourishes mined from Akira, Miracleman, and the animated adaptation of The Dark Knight Returns.

Man of Steel's action moments are steeped in these kind of clashing, discordant influences - a comic artist's reference shelf nabbed at random and hammered together around the hollow, infuriating tale of two losers putting lumps on each other.
Posted by Chris Ready at 21:34:00