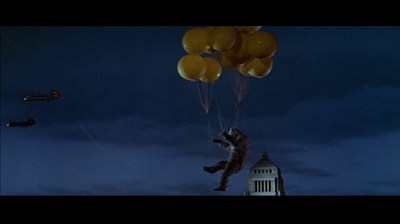 Seven years after he was buried under ice, Godzilla returns to stomp all over the Japanese economic miracle. After a couple of reels of scene-setting that includes awful, shoe polish make-up, Kong getting stoned on magical berry juice and an unexpectedly clumsy American nuclear submarine, King Kong vs Godzilla finally has the titular duo meet up in a valley strewn with train debris. Godzilla has already spent several minutes trashing anything he can put his feet on, but the sight of King Kong gives him pause. The Big G is spellbound. He recognises an equal, perhaps even a mate. When a helicopter strays too close to the monsters Godzilla blasts it with his radioactive breath, instantly incinerating it. Kong misinterprets this apparently romantic overture as an act of aggression. How does he respond? He starts hurling fucking boulders at the heartbroken reptile.
Posted by Chris Ready at 15:38:00