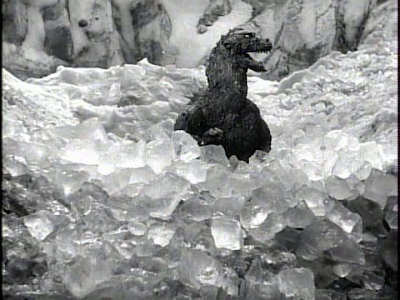 The title Godzilla Raids Again is up there on the screen, but the version viewed here is undoubtedly Paul Schreibman's hatchet job Gigantis, the Fire Monster, a nipped and tucked re-edit designed to appeal to American audiences. It's difficult to get a sense of how much damage Schreibman has done to Motoyoshi Oda's film. Although scenes have been deleted and a voice-over by the guy who dubbed Han in Enter the Dragon has been added, the film still limps along like a dreary knock-off. Like many sequels Godzilla Raids Again misses the point of the first film, punching up the boring human content and doubling down on the monsters and the amount of cities they ruin.

This new, slightly sleeker Godzilla is joined by Anguirus, another mutation who hovers somewhere between a Hellhound and an armoured crocodile. Although the duo speak the same shrill avian language, they still end up battling every time they catch sight of each other. Their fights are shot as rapid tussles that emphasise a sense of prickly irritability, rather than the slow motion weight and heft seen in later entries. Unfortunately, the fallout trauma of the first film is gone too, replaced with a cheery blitz spirit. The city wide destruction is likewise depicted as spectacle for gawkers, rather than the brain-frying horror of these towering monsters brushing up against our fragile world.
Posted by Chris Ready at 13:00:00