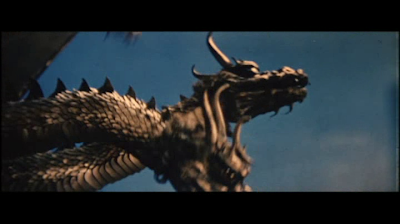 Buried somewhere in a film primarily concerned with an amnesic Princess, who believes she's a psychic space alien, is an alarmist Cold War parable about the rise of Red China. The gentle, diplomatic Mothra stands in for Japan, the formerly all-powerful insect stuck in her larvae form after the events in the previous film. Mothra is beseeched by the Infant Island pixies to broker peace between Godzilla and another Toho house monster, a supersonic prehistoric bird named Rodan. The pair are currently thrashing around the Japanese countryside playing the most violent game of heads and volleys in history. The battling superpowers are told they must put aside their differences if they are to stand a chance against the majestic golden giant, King Ghidorah.

Ghidorah, the Three-Headed Monster represents another distinct shift in Godzilla's screen identity. Over the course of the series he's evolved from destruction made flesh to a cornered animal. In this film he becomes a hero, rushing to Mothra's aid when it becomes clear the little caterpillar doesn't stand a chance against the latest threat to Earth. To ease this rebranding, Godzilla has spent most of the film far away from civilisation, capering and cracking rocks over a chummy opponent's head. The radioactive reptile is still destructive but it's a safer kind of demolition. By way of contrast, the arrival of space hydra Ghidorah is marked by intense, prefecture leveling violence. The dragon spits his yellow lightning at everything in sight, reveling in the carnage and shrieking in a high, electronic voice. When Ghidorah, the Three-Headed Monster was released in 1964, The People's Republic of China had recently become the fifth nuclear power. Given Japan's appalling mistreatment of that country only a few decades earlier, it's easy to see why they might fear an imminent nuclear apocalypse.
Posted by Chris Ready at 14:19:00