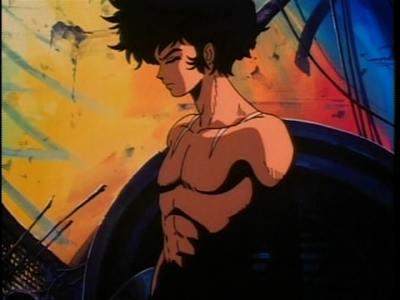 Devilman: The Birth is superheroics as a pubescent acne rash. The OAV maps the body altering transformation of Akira Fudo from a mousy, but determined teenage boy into a grinning hate machine. Fudo is recruited into an apocalypse war by BMX bandit Ryo Asuka, whose father recently went insane after becoming possessed by an ancient spirit. Asuka warns that global warming is freeing prehistoric devils from their icy prisons, and that the only way for humans to survive in this horrifying new world is to merge with wandering demon souls. Naturally, Ryo has planned ahead, creating a vast underground Sabbath to attract these ghostly apparitions.

Asuka's Black Mass is a rock and roll slaughterhouse, full of shirtless junkies and vicious molls. The only way for the two boys to ascend is to lose control, thus Fudo gets naked and boozed up. The Birth then has two distinct tones, each designed to match Akira's understanding of his situation. The first half revels in a childish idea of reality. Bullies prove their malevolence by taking potshots at rabbits with catapults, and Akira's gal-pal weirds him out when she makes a romantic pass. Fudo is trapped in a shallow, school sized idea of the world. He's bored and unwilling to engage with the possibilities around him. When Asuka whisks him away with promises of a conflict that hinges on the potential destruction of his identity, Akira quickly agrees. Finally he will have a drive.

Fudo's transformation hinges on his interaction with a mainstay of the adult experience - a night club. Initially Akira is uncomfortable, he finds the drop-out adults around him alarming. The blatant sexuality of the women in particular terrifies him. He mixes, but doesn't quite engage. When the revelers start mutating, Akira does not. He hasn't lost his mind yet. The boy's change comes when he is confronted by a monster with nightmare dimensions. Fudo controls his terror, ensnaring the most powerful spirit of all. Akira and a war demon named Amon are merged into the composite identity Devilman, a violent beast that has no allegiance to either of the races who birthed him. While Devilman gleefully attacks everything in sight, Asuka reflects that he's accidentally created the most dangerous demon of all. Scared of girls, and blind to his best friend's apparent infatuation, Akira Fudo instead explores his sexuality by dominating and rending engorged, naked monsters.
Posted by Chris Ready at 13:37:00