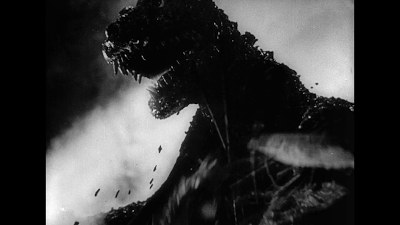 Rather than focus on a few determined players struggling through a monster attack, Godzilla rather appropriately takes a God's eye view of events. The film unfolds in step with a society's reaction to being suddenly attacked by an unstoppable force of nature. At first the creature is contextualised by primitive fisherman as a monstrous spirit that must be appeased with human sacrifice. Given that by this point he's already chewed through umpteen shipping vessels and dozens of sailors, that idea is quickly dropped. Next the Japanese government decides to erect a gigantic electrified perimeter fence to deter the prehistoric invader, this only ends up pissing Godzilla off.

Finally the jet powered might of the Japanese Self-Defense Force is let loose to deal with the monster. This does eventually drive him back to the ocean depths, but there's very little indication he's been hurt - he may well just be bored for all we know. In his début feature Godzilla represents the sheer indomitability of disasters both nuclear and natural. When soldiers line up to blast a Vickers gun at the beast there's a sense that they might as well be hurling fireworks at a tornado. Although never explicitly stated, it seems Godzilla is a territorial beast seeking revenge for his disrupted underwater environment. His attacks more warnings to leave him alone than outright satanic malevolence. At the film's conclusion the creature is even photographed sympathetically as it lies on the ocean floor; Godzilla looking on sadly as two tiny divers scramble around him with humanity's latest world ending weapon.
Posted by Chris Ready at 22:13:00