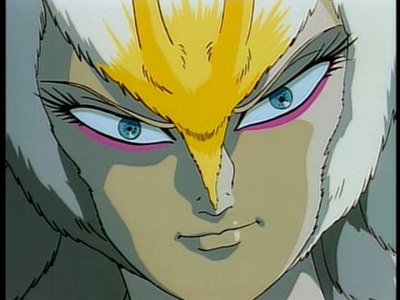 In Devilman 2: The Demon Bird Akira Fudo is becoming a vague memory. After merging with Amon, Akira has become a spiky haired thug, taken to prowling underground ruins in search of demons to fight. The real break from his former identity comes following a battle with a turtle monster who has imprisoned the soul of Akira's mother in its shell. Initially reluctant to do damage to the demon, Akira is finally convinced by the spectral remnants of his parent invading his mind and forcing him to be a spectator to her actual death in the Arctic, months earlier. After tearing his opponent apart, Akira slumps off back to his adopted home and Mika, a tomboyish school-friend who has romantic designs on him.

After driving her away with a sexually aggressive pass, Akira glowers until the house is attacked by a group of demons lead by a naked, monstrous bird woman. The first Devilman OAV presented the demons as a prehistoric race who reproduced through violent clashes. Rather than copulate, the monsters would rip each other apart and fuse the most exciting leftovers with their own bodies, creating even more dangerous creatures. This frames the extended battle between Devilman and Sirene as an apocalyptic fuck-fest, with the two opponents / lovers tearing handfuls out of each other in pursuit of a composite identity. Their battle is also terrifying from a human perspective - neither has even the faintest regard for the hundreds of people they mulch during their foreplay. Even Devilman, the notional hero, takes a frustrated swipe at a passing airliner when his efforts to kill Sirene are thwarted. Akira, and even Amon, are gone. All that is left is Devilman, an angry, possessive animal desperate to be the last thing standing.
Posted by Chris Ready at 17:33:00