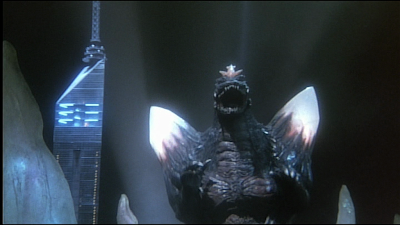 Godzilla vs SpaceGodzilla represents a series in terminal decline. Unlike the lesser Showa efforts, the film doesn't even have brevity on its side, clocking in at just over 100 minutes. Apparently at least twenty minutes were shorn from an early assembly cut, considering the ineptitude on display here I shudder to think what horrors those sequences contained. After all, this is a film in which the co-pilot of a skyscraper sized mole machine launches an attack on his commanding officer in the middle of a Godzilla strafing run. We spend at least a minute watching the rest of the MOGUERA crew dragging the unconscious pilot from his flight seat, then propping him up in the back corner of the control room. Again, this prolonged coup d'état was initiated in the midst of playing chicken with The King of Monsters.

Once again we're stuck dealing with uninvolving human characters, leaden plotting, and dreary island hopping. Worst of all, SpaceGodzilla employs recycled footage to paper over unsatisfactory miniature effects. The most egregious example of this is a sea battle between Godzilla and the Japanese navy, borrowed from Godzilla vs Biollante. SpaceGodzilla simply fails to coalesce. Resident psychic Miki Saegusa is relegated to fretting and, despite a hide bristling with cosmic diamonds, the SpaceGodzilla monster winds up being the Toho equivalent of Superman IV: The Quest for Peace's Nuclear Man. Blessed with a more muscular frame and seething with spikes, the cosmic clone disappoints - he's little more than a scratchy, bitey, prima donna. Like Nukes, he's also had orange lightning scrawled all over its body in post. The film makes zero effort to characterise this SpaceGodzilla. Although apparently acting under his own volition, the monster doesn't enjoy the carnage he creates. He's simply a Godzilla shaped obstacle. One-and-gone director Kensho Yamashita even manages to fumble Koichi Kawakita's beautiful redesign of the MOGUERA mech from The Mysterians, repeatedly shooting it from the same boring television angles.
Posted by Chris Ready at 18:36:00