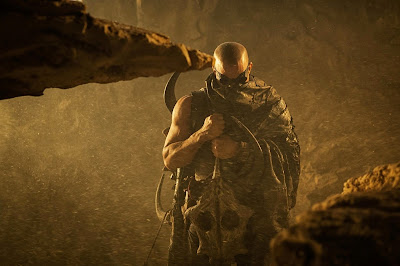 Vin Diesel deserves better than this. I'm not really sure why. Most of his films are basically awful. I just quite like him. He's a faintly absurd action proposition, his main skills are that he's blessed with a rumbling voice and that he's devoid of hair. There's a refreshing lack of irony in how we are asked to consider the action star Vin Diesel. He's big. He has muscles. He kills things. His voice is incredibly deep. His voice is so fucking deep in fact that it never registers above a growl. It's always guttural and wheezing. How masculine is that? Ludicrously so.

At its best Riddick recognises this. The film actually features a scene in which Vin out barks a gigantic space mutt. To prove himself the alpha Vin lowers his voice to an intimidating subwoofer frequency. Of course the hyena thing relents. An extra long first act contains Riddick's best material. His betrayal at the hands of an expensive looking empire bleeds into a desperate desert trek in which Vin makes himself immune to alien venom by constantly poisoning himself with it. Disappointingly, Vin eventually makes it to civilisation, initialising a dire bounty hunter scenario full of sexual assault, illogical double-crosses, and the kind of tin-eared action talk last heard in Ghosts of Mars. What a waste.
Posted by Chris Ready at 23:44:00

...what fucking pile of trash of a movie. i had so much hope to be a good one. fuck u both vin and david