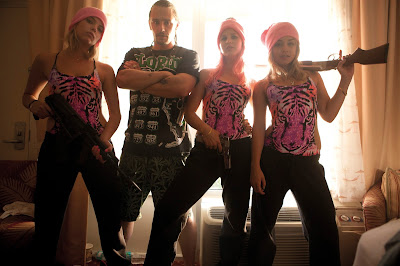 A group of girls, currently too cash poor to escape their dreary university campus, turn to armed robbery to fund a holiday. Once at the beach their days become an endless Bacchanalian blow out; a bright, poppy pocket life devoid of responsibilities or even downtime. One of the girls talks about the goof off as a religious experience. Squashed in next to dozens of boozed up children is the closest she's ever felt to God. Her life is finally how she imagines it should be - an MTV beach party. The girls repeat "spring break" over and over like a monastic chant, attempting to conjure up the privileged, commodity centred dream they've been sold all their lives.

Eventually the situation sours and the group come into the orbit of Alien, a shamanistic Cribs criminal obsessed with living out a gangster rap narrative. Two of the girls recoil and flee, leaving their friends to form a polyamorous relationship with Alien based on a mutual love of automatic weapons and Britney Spears pop ballads. Equality is maintained by the girl's refusal to be submissive arm candy and their willingness to participate in the ridiculous dynastic struggle Alien has wished into being. Ultimately, Spring Breakers seems to be about the second acts middle-class white kids are allowed to have. Mistakes made, they have the financial and psychological resources to put their past behind them and slot back into mainstream society. For them, consequences are an abstraction. Everyone else gets to die poor.
Posted by Chris Ready at 17:41:00