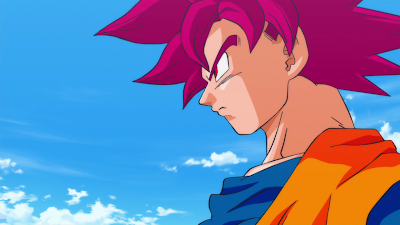 Dragon Ball Z: Battle of Gods further explores the celestial chicanery at work in Akira Toriyama's martial arts universe. This astral plain is a functioning bureaucracy, full of bizarre middle-managers who spend their days tending to their own micro-planets and gawping at galaxy shredding match-ups. The latest edition to this heavenly hierarchy is Bills, a purple man-sized cat who also happens to be The God of Destruction.

Like most felines, Bills is lazy and capricious, tending to obliterate planets according to whim rather than strictly reasoned logic. Journeying to Earth on the off-chance there's someone there powerful enough to fight him, Bills instead spends the majority of his time breakdancing and sampling appetisers at Bulma's birthday party. Although Goku does eventually ascend to a new super saiyajin form buff enough to stand toe-to-toe with Bills, Battle of Gods is more of a comedic victory lap about oral-stage fixated idiots, who just happen to be insanely powerful, than a gruelling battle for survival.
Posted by Chris Ready at 22:19:00