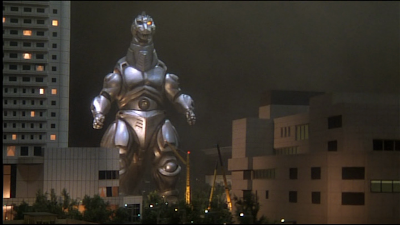 The Heisei series started with such promise. The first two installments were an entertaining and credible platform to launch a brand new kind of Godzilla. The Return of Godzilla and Godzilla vs Biollante promised an ongoing narrative focused on topical science fact and speculative science fiction. Unfortunately once Biollante tanked this idea evaporated. With the franchise thrashing about in search of a consistent sense of identity, Toho decided to grasp for reductive nostalgia. Godzilla vs Mechagodzilla II starts off well with the in-universe equivalent of the United Nations raising the sunken remains of Mecha King Ghidorah in order to plunder its futuristic robo-tech. When Godzilla next attacks, they will have a mechanical facsimile ready to fight back. Mankind is finally going on the offensive.

The stage is set for a military minded Godzilla sequel focused on first-response combatants and evolving anti-kaiju technology. This excitement quickly dissipates. Unfortunately, our guide into this world is a lanky moron that sleeps through Godzilla defence class, abandons his post, and is obsessed with Pteranodons. Why are we focusing on this guy over psychic mainstay Miki Saegusa? Her sympathetic relationship with the King of Monsters could have been an interesting way into an all-out Godzilla war. Instead we get a bumbling oaf blackmailing his way to the top. Having desperately leafed through a book of Showa tropes to find something, anything, that has worked before, the producers of Mechagodzilla II have arrived at the lobotomised nonsense of Jun Fukuda.

If ace pilot dipshit wasn't bad enough, Godzilla is also given another cute son. Although not quite as repulsive as Minilla, Baby Godzilla is so awfully conceived that his scenes suck the life out of the film. First of all he looks dreadful - a dinosaur suit with baggy ankles, topped off with a gap-toothed head. He isn't even lit sympathetically. To better illuminate the human characters he spends the majority of his screen time around, withering, caustic light is poured onto the creature, exposing the rubbery impossibility of his hide. Born from a prehistoric egg, Baby Godzilla instantly imprints on a spunky lab assistant then acts like no animal that has ever lived. He isn't excitable, or even curious. Seconds after his birth he stands silently in a line-up of straight-faced scientists, listening patiently to an exposition dump. Baby Godzilla is simply farcical. By the time the film has churned through this material, limping towards a kaleidoscopic beam conflict, it's difficult to even care.
Posted by Chris Ready at 12:48:00