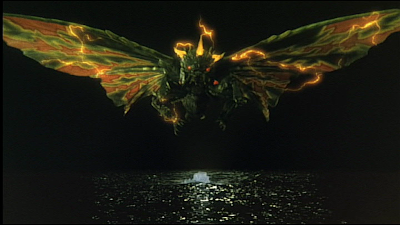 After the success of Godzilla vs King Ghidorah, Toho rummaged through their back catalogue for another Showa foe to stand against the King of Monsters. It's a shame Godzilla vs Biollante wasn't more successful. As fun as it is to see the older monsters given 90s makeovers, I'd much rather see Godzilla tearing brand new designs limb from limb. Godzilla vs Mothra goes some way to satisfying that desire by introducing a violent male opposite for Mothra. Like his sister, Battra is able to evolve from a larval form into a flying adult. Unlike Mothra, who is specifically designed to be beautiful and tragic, Battra is a leathery, demonic beast. He has the wingspan of a dragon, decorated with amped-up rage colours arranged like jungle camouflage.

Godzilla vs Mothra is unusual in that the monster story is essentially just the broad beats of the human drama scaled up for cataclysm. The lion's share of the film revolves around a divorced couple's attempts at reconciliation. Masako is a stoic, emotionally mature woman while her ex-husband is brash and childish. His efforts towards accordance are bafflingly ill-considered, forcing Masako to rise above his immaturity for the sake of their family. The females in Godzilla vs Mothra are the peacemakers, able to use their beauty and diplomatic skills to coerce something useful from their boneheaded male counterparts. As for Godzilla himself, he's basically a bystander in his own movie. Mostly absent and bereft of agenda, he occasionally wanders into the frame to job for the lepidoptera tag team.
Posted by Chris Ready at 14:12:00