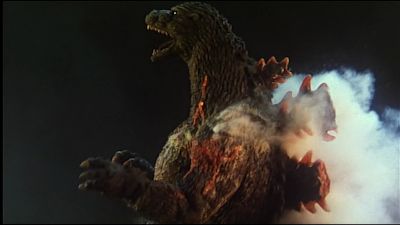 With the threat of an American Godzilla series looming over them, Toho decided to give their creation the send off he deserved. Godzilla vs Destoroyah is an elegy, as much for tokusatsu cinema as the King of Monsters. The incredible success of Steven Spielberg's Jurassic Park aroused interest in other monster properties, jump-starting TriStar's own Godzilla project. A Hollywood produced Godzilla promised bleeding edge mechanical and computer generated special effects. Toho's more modestly budgeted films were on the verge of looking hopelessly outdated. If America's new Godzilla was successful, more films would be produced. The Japanese original was in danger of becoming a footnote.

This sadness is evident at every level of Godzilla vs Destoroyah. Director Takao Okawara frames the film with the same sense of melancholy he brought to Godzilla vs Mothra. The usually eternal Godzilla is dying. His heart is pumping out dangerous amounts of heat causing the kaiju to go into nuclear meltdown. His body is criss-crossed by larva coloured veins, his spines glow red hot. Smoke hisses from his pores. Godzilla acts like a rabid animal, demolishing Hong Kong before the film's even properly started. Japanese and American scientists theorise that should the monster detonate, the blast could render the Earth uninhabitable. Desperate to defeat this walking Chernobyl, researchers reconsider the oxygen destroyer that defeated the original Godzilla. Before any breakthroughs can be made though, a rapidly evolving anti-life creature is discovered. The stage is set for a showdown between two competing cataclysms.

Koichi Kawakita's final contribution to the Godzilla series is perhaps his best. The special effects director juggles four separate creatures, each with their own distinct design philosophy. Godzilla is transformed into a mobile level 7 event, pissing steam and glowing like a supernova. Little Godzilla has matured and mutated into an adolescent, athletic version of his father, while the Super-X III looks like a B-52 bomber put together by the Tracy brothers. Finally there's the satanic majesty of Godzilla's enemy Destoroyah. The Heisei series has been obsessed with pitting Godzilla against corrupt opposites. First it was a female clone born from a rose, then a machine, followed by a cosmic pretender. Finally it's a demonic reflection given life from the ruins of the original monster. When Godzilla and Destoroyah finally clash it isn't the dull laser war that has marred the last few entries. The monsters slash and tear at each other, they hurl their bodies about and stamp Tokyo flat. It's apocalyptic and engaging in a way the series hasn't hasn't quite managed since Godzilla vs Hedorah.

Godzilla vs Destoroyah's greatest achievement though is in the way it characterises The Big G. The monster is elevated from a roaming natural disaster to a fully-fledged dramatic participant. In a moment of respite during the final conflict, Godzilla wanders over to where his son has fallen. He finds a shattered, dying creature. The towering radioactive beast tries desperately to breath his poisonous life force into his offspring. When Godzilla Junior fails to respond, Godzilla is bereft. Okawara has the confidence to hold the moment and play off Kenpachiro Satsuma's suit acting. 22 movies deep we get to see the impassive kaiju monarch considering defeat. He's had enough. There's no chance of respite, this Godzilla must die. This vital, important Japanese cultural icon is close to his end. Beyond this point his name will surely start to mean something else. His form adopted by another, with the potential to be internationally relevant. When Destoroyah is eventually vanquished it's almost an afterthought. He isn't important. All that matters is that this Godzilla can't control his temperature any longer. His spines bubble and drool, his skin tumbles off like ash. Time slows. Akira Ifukube's beautiful score rises. You'll believe a God can die.
Posted by Chris Ready at 21:30:00