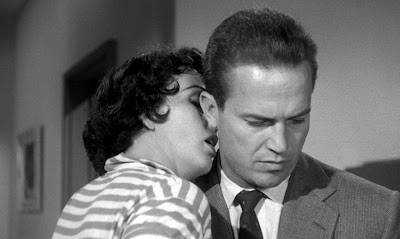 Ralph Meeker plays Mike Hammer as a brutal, bullying thug. His detective process is little more than finding someone who knows more than him, then beating the shit out of them until they part with the information. Robert Aldrich's adventure, adapted from the Mickey Spillane novel of the same name, begins when Hammer comes across a psychiatric patient wandering down a lonely road. The duo are subsequently attacked; Hammer framed for the women's torture and murder. This outrage prompts, not so much a quest for vengeance or a desire to clear his own name, but a perceived opportunity for Hammer to score some big money. The private detective's response is to mindlessly and aggressively hound anyone he can think of in pursuit of this imagined pot of gold. This greed leading Meeker's lout to a nightmarish, atomic age Pandora's Box. Sadistic and morally bleak, Kiss Me Deadly is a tonic - a mix of opportunistic amorality and a physical nastiness that feels legitimately shocking, especially given that the film was released deep in the Hays Code era.
Posted by Chris Ready at 13:46:00