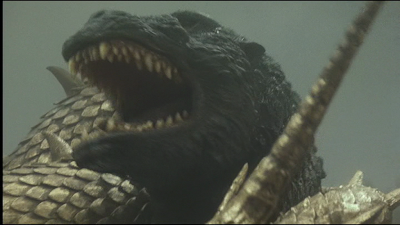 In the early 1990s there was a pronounced shift in the attitude of the United States towards Japan. With the Soviet Union in tatters there was a feeling in some quarters that Japan's rapid economic growth posed a greater threat to American stability than a flagging military superpower. Godzilla vs King Ghidorah takes this fraught, coarsening relationship and uses it as the basis for a time travel action film. In the 23rd century Japan effectively rules the world having diversified its property portfolio to include entire continents. A team of do-gooder terrorists, primarily made up of Americans and Russians, travel back to the 20th century to sabotage Godzilla's birth and ensure a new, more pliable monster is born in his place.

Time travel in Godzilla vs King Ghidorah is a mixed blessing. While it allows the filmmakers to wind the clock back to 1944 and the Pacific Theatre to glimpse a pre-radioactive Godzilla, it also ties the film up in conceptual knots. It's difficult to tell if the film intends to show that these attempts to meddle with Japan's karmic stream are ineffectual, or if it just treats reality bending round-trips as a package holiday. This impotence intensifies the second act sag usually felt in lesser Godzilla films. Instead of helping to drive the narrative, our heroes are just passengers along for the ride. Still, the ends eventually justify the means. Godzilla vs King Ghidorah gives us an origin story for both creatures. The former Monster Zero's conception is engineered by future visitors who leave three repulsive cuddly toys to be fused together by Cold War H-bomb tests, forming the regal golden dragon.

On the same trip, Godzilla is glimpsed as the GI stomping guardian dinosaur of some anonymous Marshall Island. The entrenched Japanese soldiers weep as the ruinously injured Tyrannosaur gasps for breath having just terminated an entire platoon of invading Americans. In these moments the Godzilla series seems to be steering wildly away from the post-war shame that hung over the Showa films. Nationalism in the series has typically been expressed through progressive political thinking and responsible scientific exploration rather than imperialist aggression. Knee-jerk viewers needn't worry. Around the time a dinosaur obsessed businessman reveals his privately owned nuclear submarine fleet, the film, and the Japanese cabinet, register a pronounced disgust with such unmoderated ambition. The self-appointed plutocrat even ends up responsible for a new Godzilla so insanely powerful that benevolent future humans must cybernetically enhance a shattered foe to stand a chance against him.
Posted by Chris Ready at 00:13:00