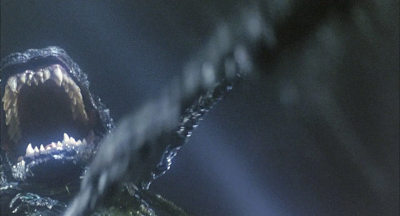 Aside from the two Mechagodzilla films, there was very little continuity in the Showa era Godzilla series. Each instalment functioned as the newest iteration of a Godzilla film with the creature's role and demeanour mutating to express public perception. Godzilla vs Biollante, the second film in the Heisei series, is different. It begins in the radioactive ruins of Tokyo with the paramilitary arms of several international pharmaceutical companies battling over Godzilla tissue samples. Jump forward a few years and although Tokyo has been rebuilt, a small corner of rubble has remained. Hollowed out and repurposed, the site has become a luxurious memorial for young lovers to sit and chat. This idea of consequences is central to the film. Godzilla exists and the world has adapted around him.

Rebooting the series has also allowed the filmmakers to replay certain beats and ideas that although interesting didn't really stick. King Kong vs Godzilla is evoked several times throughout Godzilla vs Biollante. Aside from a stomp through Osaka, the central relationship between the two daikaiju is framed in a similar way. They are equals, the only ones of their kind. This film goes further, explicitly stating that the mutated rose Biollante is, in part, a female clone of Godzilla. There are a couple of moments leading up to their first meeting where you're not quite sure how the two monsters are going to react to each other. Biollante sings a whaling, high-pitched song to attract The Big G. Are they going to mate? Perhaps Biollante even tries to. Her first reaction upon meeting her prospective partner is to trap him with snapping, vine like tentacles. Unfortunately for her, Godzilla's not the submissive type. Godzilla vs Biollante is also similar to Ishiro Honda's 1962 film in that neither beast is a champion for mankind. Biollante is the closest match, but she still kills an untold amount of Japan's Self-Defense Force when lumbering up for the finale. The best humanity can hope for is that the monsters extinguish each other.

Replacing smog monster Teruyoshi Nakano as effects director is Koichi Kawakita, a former understudy of kaiju maestro Eiji Tsuburaya. Fresh off mech-mash Gunhed, the FX director's work is a massive step up in terms of both scale and detail. Where Nakano preferred a impressionistic idea of cataclysm, Kawakita creates vast, minutely detailed expanses for Godzilla to rampage through. Kawakita's work is genuinely beautiful, crafting a believable, utilitarian reality around the fantastical monsters. Fanciful machinery is also given a makeover that stresses verisimilitude. Mazer cannons are shot like cranes, extending and pulsating with lightning energy while the new and improved Super X II aircraft loses its curves, transformed into an olive green kitbash. The monsters are even better again. This is perhaps the best Godzilla has ever looked. The addition of a detailed mouth with sharp, uneven teeth does wonders for the basic creature design. Director Kazuki Omori seems to agree, he can't stop shooting either monster's maw. He pores over them, capturing every inch of Kawakita's obsessively detailed dentures.
Posted by Chris Ready at 23:52:00