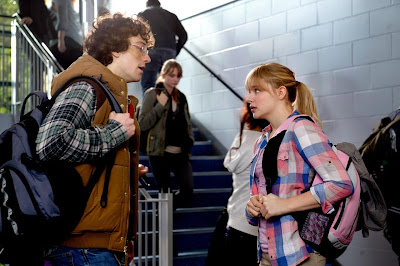 Kick-Ass 2 makes you appreciate all the hard work Jane Goldman and Matthew Vaughn put in transforming Mark Millar and John Romita Jr's loser Daredevil comic into a diverting Summer prank. Even though they filed down some of the spikier edges, taking something notionally designed as damaged and changing it into a power fantasy, at least there was one consistent vision. Jeff Wadlow's Kick-Ass 2 is nothing like that.

The film comes on like a pooh poking teen flick, then can't help divulging into the pitiless torture and murder of loved ones. Scenes of Christopher Mintz-Plasse trying to run a criminal empire whilst twatting about with his mother's gimp gear somehow stumble off into abortive sexual abuse scenarios. McLovin armed to teeth and calling himself The Motherfucker fits in well with the gross-out superheroics proposition. The same guy standing in the corner of a terrified woman's room, desperately trying to tug enough life into his flaccid cock to rape her does not.

Kick-Ass 2 doesn't have anything like the heft required to make these revolting little diversions organic. How can we care about Dave Lizewski's bewildered Dad when every other death is played like a punchline? Are we supposed to be able to invest in the resulting retribution when the guy who rats him out is folded back into the hero team without incident? This sloppiness is all over the film. Action scenes are edited around numb impacts, wasting the serviceable choreography that got them there. Chloe Grace Moretz's Hit-Girl is promoted to dual lead then wasted on a tin eared retread of Mean Girls awash with puking and diarrhoea. Kick-Ass 2 never even tries to outdo its predecessor or their ugly source material. It pisses away its best attribute in a flurry of homely CG and ends allergic to consequences.
Posted by Chris Ready at 23:48:00