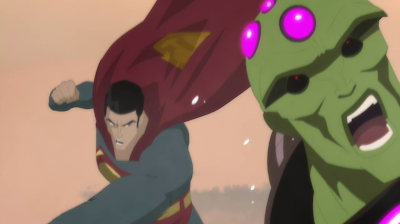 Released as a supplementary shelfwarmer for Zack Snyder's blockbuster, Superman: Unbound doesn't so much compliment the Man of Steel as embarrass it. In just half the running time, James Tucker's film establishes three different superbeings, each with their own idea of how their power should be used. Superman is there to catch people when they fall, a traumatised Supergirl wants to police the third world, whilst Brainiac catalogues and collects the people of the known universe, whether they like it or not.

The casual inhumanity of Brainiac's mission drives the film, leaving psychological marks on anyone unlucky enough to come into contact with him. Were Steel hesitated and contradicted, Superman: Unbound keeps it simple, letting drama flow from the characters and their relationships. Aesthetically, Unbound ditches on the muscleman classicism of Gary Frank's original art, arriving at something simpler and spikier. His Brainiac design is beefed up to Masters of the Universe dimensions, his clashes with Superman becoming looser and more angular until their final dust-up resembles something like the liquid energy you see in Mamoru Hosada's work.
Posted by Chris Ready at 22:25:00