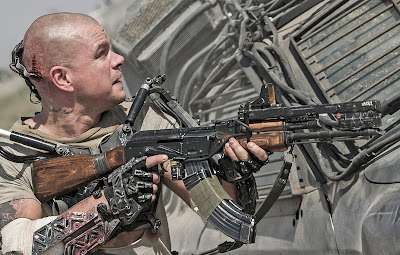 Neill Blomkamp follows up the stark, documentary styled District 9 with Elysium, a hijacked man fairy tale with universal health care as the Campbellian boon. Although broadly similar to its predecessor - Elysium again tracks a bio-mechanically augmented Joe Sixpack - Blomkamp's latest lacks the dithering desperation that made District 9 a unique Summertime proposition. Elysium is something closer to Avatar, a left-leaning monomyth that talks about injury and trans-human expression. As in James Cameron's film, Max Da Costa's agency is betrayed by a failing body, for which he must seek an alternative. Unlike Avatar, Max isn't reborn as a sexually virile feline. Instead his transcendence involves having a ugly web of cybernetic braces welded to his nervous system. This cobble-tech allowing him to stand toe-to-toe with the sparkling robots that have replaced Earth's middle classes.

Initially Max isn't even particularly heroic. He isn't working towards a grand goal, he just wants to flush his body of radiation. His part in the peasant uprising is that of a blunt instrument, relentlessly charging forward to clear a path for a civic minded criminal class that respect ability and sticks together. Blomkamp is especially careful to portray Elysium's mobsters as victims of circumstance striving for parity, rather than the usual psychotic opportunists. Elysium benefits from these inversions. By specifically not making Max a charismatic rallying point it allows the film to side-step some (if not all) of the more patronising messianic whitey ideas native to this sci-fi subgenre. Max is bereft of socialist ideology, if anything his personal political outlook is closer to the bootstraps rhetoric of blue collar conservatives. His struggle is instead a series of biological imperatives.

To begin with he just wants to survive, to be able to naturally live out an interminable existence spent assembling robots for almost zero personal gain. After his accident, it's crucial that he returns to criminality because the system refuses to take care of him. Eventually he wants to ensure a favourable future for a child he barely knows. The change is instantaneous and perhaps even poorly handled, but it is consistent with the fundamental characteristics of Max. His robo-crimes are all motivated by class, or an accident of birth, and focused on equalising an unfair situation. There's never a sense that he is striving for more than he deserves. He simply wants a just and reasonable return on his hard work. In this sense Blomkamp has taken a basic sketch of working class masculine drives and blown them up into a Syd Mead slugfest. The disconnected, hard-working father figure presented as the highest heroic ideal. His sole motivation to provide, his greatest ability to destroy himself for those he loves.
Posted by Chris Ready at 19:02:00