Terror of Mechagodzilla / The Terror of Godzilla 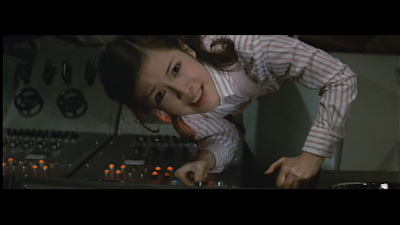 Ishiro Honda's final film follows on directly from the Black Hole alien threat of Godzilla vs Mechagodzilla, layering in the story of a disgraced scientist and his clairvoyant daughter Katsura. The duo are prompted by the dastardly Simians to take telepathic control of a timid kaiju named Titanosaurus, who resembles an amphibious dragon. The beast is then forced to act as an interim threat to Japan while Mechagodzilla is brought back up to spec. Unfortunately, the first hour of Terror of Mechagodzilla is marred by the kind of hesitation typically seen in Jun Fukuda's films. The human scenes, usually Honda's strongest suit, are harmed by indecision. It seems the filmmakers can't quite decide if they want their film to be a spy thriller or a romantic drama.

Maddeningly we get both, giving the film a stop-start quality. We careen back and forth between scale submarines dodging behemoths and long scenes of two beautiful young things avoiding eye contact. Still, this meandering courtship does allow for one genuinely wonderful moment - an injured Katsura attempting to casually hide her true, robotic nature from the man who has just rescued her from psychic slavery by slipping her hand over her exposed mechanism. Thankfully, Terror shifts up about twelve gears for its finale. While Interpol agents are struggling to put together a sonic death ray, Titanosaurus and Mechagodzilla absolutely level the city of Yokosuka.

The destruction isn't the kind of orgiastic tantrum seen in the last few films; instead it's a slow, measured demolition. As ever, Honda dwells on the aftermath of such devastation, filling the screen with twisted steel and gutted buildings. This is one of the more striking differences between Honda and Jun Fukuda. In Fukuda's films, you get a sense that he delights in the stomping, or simply understands that the audience might. Honda on the other hand always gives these scenes a tragic, human weight. He won't allow any dissonance to develop. In Honda's world death rays always produce ruins. People, particularly children, are likewise always in the cross-fire.

For his last Showa series appearance Godzilla is revealed as a semi-corporeal guardian spirit that can be summoned into our realm by dying adolescents. This Godzilla is a dog-faced brawler, capable of soaking up extreme punishment in the pursuit of cosmic justice. The Big G boxes clever, taking on each enemy in the singular, getting close, then using their own body against them in a series of vicious attacks. Interestingly, when it comes down to it, he is not much of a merciful God either. When Titanosaurus' mind-control link is suspended the King of Monsters has absolutely no problem battering, and perhaps even killing, the hapless creature. He's less a conquering sportsman here, more a physical embodiment of karmic punishment. This is the strength of Terror of Mechagodzilla, it takes the foibles of the 1970s Godzilla films - most notably the tag-team opponents, alien intervention, and youth driven drama - and twists them just enough to arrive somewhere admirable.
Posted by Chris Ready at 02:02:00